He knocked Tiger Woods from the World No.1 position at the height of his fame and now David Duval is trying his hand on the Champions Tour.

The 13-time PGA Tour winner turned 50 in November last year and will line up at this week’s Mitsubishi Electric Championship in Hawaii looking for his first win anywhere on Tour since the 2001 Open Championship. 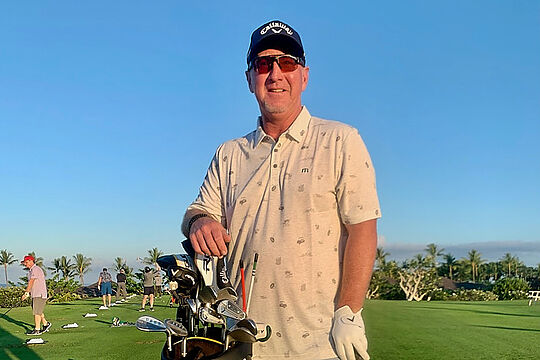 So how does the former World No.1 feel about his return to competitive golf?

“There’s some nervousness and some excitement…because I haven’t competed consistently for a very long time, but the opportunity to do that is just putting a smile on my face,” said Duval ahead of this week’s tournament in Hawaii.

“I’ve been working hard on my game for almost a year now, I feel confident about where I’m at, and I’m looking forward to getting back out and competing.”

Duval played his first full season on the PGA Tour in 1995 and showed promise early on with three runner-up finishes and eight top-10 finishes that season. The following year it was much the same again with two second places and six top-10′s but no W’s.

By mid-1997 he had once again carded two second places and a handful of top-10′s but in October his world would change. Following 86 PGA Tour starts, Duval would suddenly reel off three wins in a row at the Michelob Championship at Kingsmill, Walt Disney World/Oldsmobile Classic and the Tour Championship and was the talk of the tour alongside Tiger Woods, who had also won four titles that year including a 12-shot victory at the Masters.

Another four wins came for Duval in 1998 and then again 1999 along with a move to World No.1 following his win at the Players Championship. All the while, Woods was putting his own mark on world golf claiming a stunning eight titles that season alone.

Plagued by injury and the ensuing lack of confidence that would define the next two decades of his career, Duval won only once in 2000 before a final hurrah in 2001 when he claimed the Open Championship, which would mark the last of his 13 PGA Tour titles and his only major win.

Following that year, the Florida-native inexplicably fell from grace and by the end of 2003, he had missed 14 cuts from 18 events and was sitting at 236th in the world.

Duval continued to play and miss cuts before (mostly) hanging up his clubs for good after the 2014 season.

“I look back and think that, had I not had those things happen, I was potentially a 20-plus tournament winner and maybe a multiple-major winner. At the same time, when I get asked a question and you start listing the things that I accomplished, I think to myself, Damn, that’s pretty good!”