A teary-eyed Grant Forrest dedicated a maiden European Tour victory at the Hero Open to the memory of his late father, Graeme.

Forrest, 28, brilliantly birdied his closing two holes to win by a shot with a closing round 66 and a 24-under par tally on the Torrance course at the Fairmont resort in St. Andrews. 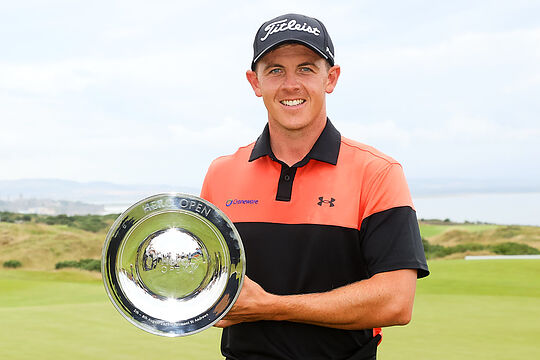 The Craigielaw golfer was one shot back of England’s James Morrison before landing his tee-shot at the par-3 17th to within virtual tap-in distance and then at the uphill par-5 last, Forrest hit a stunning second shot 2-iron to the back of the green and calmly two-putted for the winning birdie.

Forrest is the first Scot to win in Scotland since Paul Lawrie captured the 2012 Johnnie Walker Championship at Gleneagles.

It was in 2012 and just a few weeks after capturing the Scottish Amateur title when the then 19-year-old lost his father, and who would have turned 50 on the weekend of Forrest’s triumph at Royal Dornoch.

Forrest said: “Losing my dad in 2012 was a big change in our lives, and it was difficult to deal with and we do deal with in different ways.”

“I’ve just put a lot of my focus into my golf and clearly wishing he was here to see me win.”

“He’s been my inspiration for me to have knuckled down and kept going when times were tough.”

Forrest’s mother, Audery had been in tears nine-years ago when he won the pinnacle of Scottish men’s amateur golf and she was also in tears along with other members of his family following today’s victory.

Forrest said: “Golf is a funny game as you never know when it is quite going to be your week. Last week was completely the opposite for me as things didn’t go my way in missing the cut.

“You just doing the right things and trusting that and fortunately this week was my week”.

It was a quiet week for the Aussie with veteran Scott Hend leading the way in 56th place and 5-under with Jake McLeod (T70) and Austin Bautista (T72) the only others to make the cut.

Deyen Lawson and Dimi Papadatos sat out the weekend.