Four Aussies have stormed their way into the final 16 of the 2016 British Amateur Championship at Royal Portcawl in Wales.

However it is reigning Australian Amateur champion, Connor Syme of Scotland showing the way with a comprehensive 4&2 success over Spain’s Xabier Gorospe in squally conditions at Royal Porthcawl in Wales. 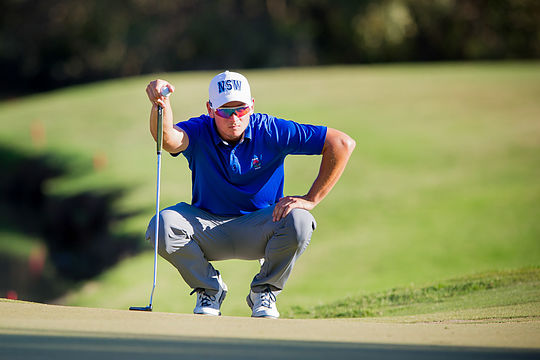 The Scottish-born Syme won three consecutive holes from the 11th to take a firm grip of the match and a day after finishing the leading stroke-play qualifier.

“I didn’t quite play my best golf today but I ground it out quite well,” he said.

“I got up and down when I needed to and holed a few key putts so I’m happy to get through the first round of match play.

Ahead of teeing up on day three, Syme was presented with an award for his qualifying achievement by the R&A’s Peter Unsworth, Chairman of the Championship Committee, and also charged with running next month’s Open at Royal Troon.

The Hunter Valley’s Dylan Perry, and winner in two of the last three years of the NSW Country Men’s Championship, triumphed against Sydney’s Travis Smyth by 3&2 to set up a third round match with 2015 Australian Amateur champion Cameron Davis, who defeated Swede Jesper Svensson by the same margin.

Smyth, who plays out of the St. Michael’s club, had lost out in the final of the Australian Amateur to Syme while Perry, who represents the Greg Norman designed course at The Vintage Club in the Hunter Valley, is also a former Jack Newton Junior Golf Foundation State Age winner.

“I played really well today,” said Perry. “It’s a matter of it coming together and a matter of patience on these golf courses. I got to off to a flyer start – I think I was 3-under through the first seven holes and then 4-up through nine – and then Travis started to come back towards the end and then I finished 3&2 so it was a good day.”

The 21-year old Davis, who is a member at both the Monash and Roseville in Sydney’s northern suburbs, also captured the 2012 China Amateur title.

Recent Victorian Amateur runner-up David Micheluzzi, a 19-year-old from Cranbourne in Melbourne, also is through to the last 16 after his 3&1 triumph over England’s Daniel Sutton.

And another Aussie in William Heffernan, who lost to Syme in the third round of the Australian Amateur, was a 2&1 winner of England’s Harry Ellis.

The highest-ranked remaining player in the field is Ivan Cantero who is fifth in the World Amateur Golf Ranking.

The Spaniard, who has two wins this season at the Copa Andalucia and the French Amateur Championship, came out on top against Scotland’s Christopher MacLean by two holes after winning his first round match in the morning by 4&3 against Englishman Jordan Matthew.

“I live in the north of Spain and we have similar courses. I like the wind and the rain – it is good for me. Tomorrow is similar to today, it is shot by shot. It’s a very long tournament and has very good players so let’s go,” said Cantaro.

“Alex Larrazabal (the 2002 Amateur Champion) is my best friend in Spain and a very good example for me.”