Funny old game, Foursomes. It has a way of testing friendships more than any other format in golf. Achieve some success however, and it can provide arguably the ultimate ‘team’ experience that our sport has to offer.

The old adage “There’s no such thing as ‘sorry’ in foursomes’ was certainly given a workout on Day 1 of the World Cup of Golf as players battled strong winds and the underlying thought process that is so difficult to suppress in Foursomes: trying to avoid putting their playing partners in a difficult position for their next shot. 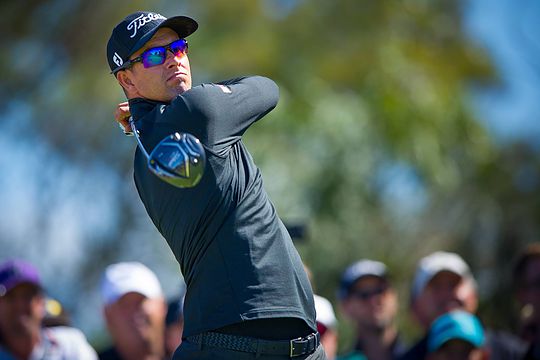 Adam Scott tees off on day one of the 2016 World Cup Of Golf in Melbourne (Credit: Anthony Powter)

It’s a state of mind that is heightened in foursomes play more so than when you’re responsible for your own score.

Adam Scott alluded to it after yesterday’s round, having put Marc Leishman in a few interesting ‘spots’ over the course of the round.

Today’s four-balls will be a vastly different kettle of fish, however, with the prospect of far more red numbers on the leaderboard.

Interestingly, the strategies to be employed do differ from team to team, it’s not just an all-out attack in the hope that their playing partners will be able to carry them if they stray.

Rickie Fowler and Jimmy Walker insisted that they would be sticking to their original game plans, with the exception of possibly a few holes that lend themselves to a more aggressive approach.

The Spanish team of Rafa Cabrera-Bello and John Rahm however, will look to extend their one-stroke lead by freewheeling it a lot more.

To a man, the players are loving this format and the big winners today will be the viewing public – assuming the fickle Melbourne weather complies!