Michael Long, Brad Shilton, Ed Stedman and amateur Aaron Wilkin are tied at 7-under the card after three rounds.

Sitting a further shot back is overnight leader Ben Campbell who, fighting a chest injury, had 2-over the card today to be outright fifth. 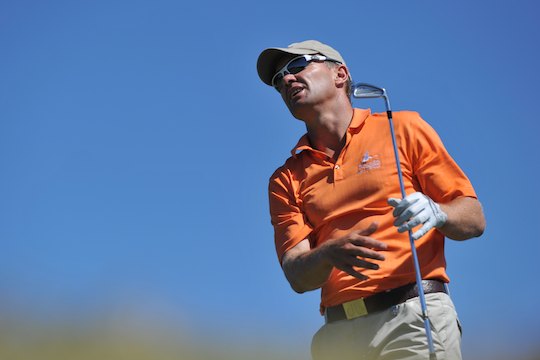 Low numbers were the order of the day highlighted by Aaron Wilkin’s 8-under 64 which catapulted him into a share of the lead.

Closing his front nine with consecutive eagles, Wilkin made the turn at 7-under the card before a steady back nine saw him safely in the clubhouse.

“It was an unbelievable front nine to be honest,” said Wilkin who closed his round with a birdie.

“I wasn’t trying to be conservative (on the back nine) but I was weary of my score.”

“To add that couple of extra birdies would have been nice but I took my take two putts where I could, I was happy with how I finished.”

Wilkin has had a successful amateur career highlighted by captaining the Queensland State Team in 2014 but has his sights firmly focused on turning Professional.

“I had a tough year (in 2014), half way through the year, after I got back from American, I sat down with my coach to get game plan for this year,” added Wilkin.

“It’s definitely been my goal to play on Tour and to see its coming to fruition is exciting.”

“The pressure is off a little now, tomorrow I’ll go out enjoy myself and hopefully learn some new things.”

The final round of PGA Tour of Australasia Qualifying School presented by Cobra Puma Golf tees off tomorrow at 7am with the final group on course at 8.55am.

The top-50 players will earn status on the PGA Tour of Australasia for the 2015 season.