New South Welshman Ben Clementson, Queenslander Anthony Quayle and Kiwis Josh Geary and Gareth Paddison fired rounds of 6-under 65 to hold at bay a pack of four players in Deyen Lawson, Sean Riordan, Daniel Nisbet and Andrew Martin who all scored 5-under 66 on day one of the NZ PGA.

“I played great today, I drove the ball really well so I was in great position all day and made a few good putts too so it was a pretty solid day,” Geary said after his round. 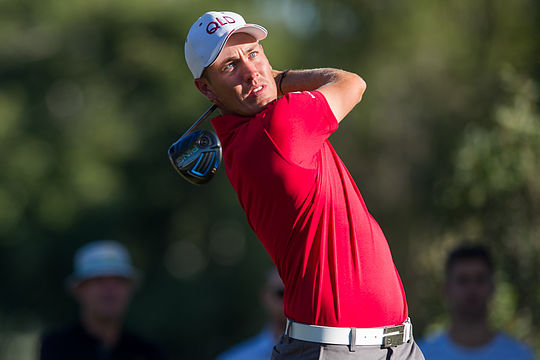 The Manawatu course is no stranger to Geary and the local knowledge has paid off early in the tournament, he’s hoping his good start can continue in to the remaining three rounds.

“I’ve played well on this course in the past and it’s pretty demanding off the tee so if you’re driving the ball well, it’s there for the taking.

“I’d love to win that’s what I’m here for, that’s what everyone is here for, I’ll just keep doing what I’m doing and hopefully it all comes together on Sunday.”

The lead looked in danger when Paddison teed off in the afternoon session, he blitzed the front nine to be 6-under at the turn.

“I was very happy with the front nine but I fell away a little bit on the back nine I dropped a shot and then picked one up on the last,” Paddison said.

“Little bit of work to do, the momentum was a lot quieter on the back nine, I thought I was in for a really good score but to finish 6-under is great.”

Paddison’s hot start quickly attracted a large gallery for this early in the tournament and he said he’d be delighted to win a tournament at home with so much support.

“The last time I won in front of a home crowd was the Scenic Circles Classic which was back in 2002, I’m a little bit longer in the tooth now!

“It’d be great to win in front of a home crowd again, a lot of work has gone in to this event, the Club Manager here Michael Williams has done a great job in getting Lawnmaster and Horizon Golf on board to get this event up and running which is really cool.

“It was nice to see people out there showing interest already on day one so I’m looking forward to the rest of the week.”

In a near exact reverse of rounds to Paddison, Quayle had a sluggish start and came home in a hurry on the back nine.

“Then on the back nine I found something and got on a bit of a roll, I made a couple of nice par saves the last two holes so I was happy to finish where I did.”

The young Queenslander echoed many of the field in saying accuracy on to the fairway’s is the key to managing the tight Manawatu course.

“Something I’ve been working on is keeping it in play and eliminating all of the erratic tee shots and I feel pretty comfortable on a course like this where you do have to step up and still hit a good tee shot.

“There’s definitely a premium for being in the fairways because they’re all tree lined and you’re either chipping out or trying to hit a little punch and run up on to the green from there.

“If you can hit fairways you’ve got plenty of birdie opportunities.”

The Lawnmaster Horizon Golf NZ PGA Championship will be played from 2-5 March at Manawatu Golf Club with a field of 132 players vying for a prize purse of NZ$125,000.

The winner will receive Official World Golf Ranking Points and become fully exempt on to the ISPS HANDA PGA Tour of Australasia for the remainder of this season plus a further season.