Fowler eyes sub-60 round on his way to Hero victory

(Albany, Bahamas:) Rickie Fowler recorded eleven birdies, including seven in succession to commence his final round, on route to a new course record along with a new career low score resulting in being handed the Hero World Challenge trophy by tournament host, Tiger Woods.

Fowler had ignited thoughts of shooting a sub-60 score with his opening birdie blitz on the final day on route to a total of 11 birdies in a sizzling 11-under par 61 to win by four shots on the Albany course in the Bahamas.

The 28-year old Fowler won for the second occasion in 2017 to register his ninth pro career success after claiming the Honda Classic by a similar victory margin.

“Finally I just kind of got everything to piece together. I got off to a good start on Thursday and birdied the first three. I feel like the swing hasn’t been far off, I’ve been making a lot of good swings all week. So it was nice to make a lot of birdies.”

“I came into this event coming off of my best year (2016/17 PGA wraparound schedule) statistically being that I put myself in a lot of positions to win, getting the win at Honda and coming off of the five-week break after the Presidents Cup and going to Mexico and finishing second and putting myself in contention there, and then to not necessarily be in contention going into Sunday but to make something happen, this is a nice way to end the golf season for me.” 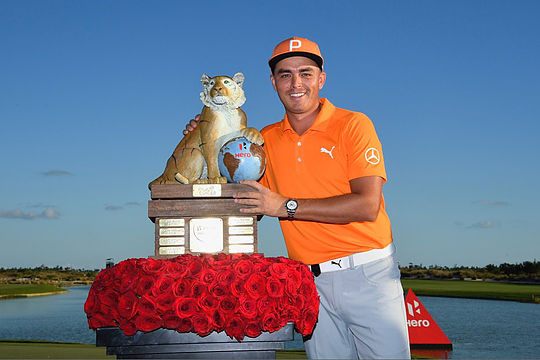 Victory will lift Fowler two places back to World No. 7.

That is 646 places higher than Woods who shared ninth place on eight-under par and only his second top-10 finish since sharing 10th in the 2015 Wyndham Championship and his last event before undergoing surgery that saw him side-lined for the remainder of 2015 and all but one event of 2016 and that being last year’s Hero World Challenge.

And Woods confirming after his round that he is confident of returning to full competition in the New Year, it prompted Fowler to be asked if could take any credit in Woods’ long-awaited return inside the ropes.

Woods, on the eve of the Bahamas event, spoke of his delight and gratitude for the likes of Dustin Johnson, Justin Thomas, Rory McIlroy and Fowler in organising practice rounds with the 14-time Major Champion.

“It was nice to see Tiger in Florida and to hear the sound of the ball coming off of the face again and him hitting quality golf shots and driving the ball long and straight, him being able to work it both ways in crosswinds,” said Fowler.

“I don’t want to say that I felt intimidated because I don’t want his head to get too big. I don’t want to talk him up much. Obviously Tiger has a presence, and to be able to go and have matches together at home and kind of push each other, it’s fun because it brings out I feel like the best in each other.”

“To help each other, helping me kind of get ready for the two events that I played through the fall and ultimately getting him to where he can come and play this week. Not that I had a big influence, he can do all this on his own.”

“No, I wasn’t surprised with the way he played this week. I know yesterday was a bummer it was for him.”

“I wouldn’t have been surprised if Tiger was in contention coming down the last nine holes today,” said Fowler.

“I think he exceeded a lot of people’s expectations.”