Maybe that new rule where you drop the ball from knee high isn’t as popular as well thought it might be.

Not that popular American Rickie Fowler has complained. 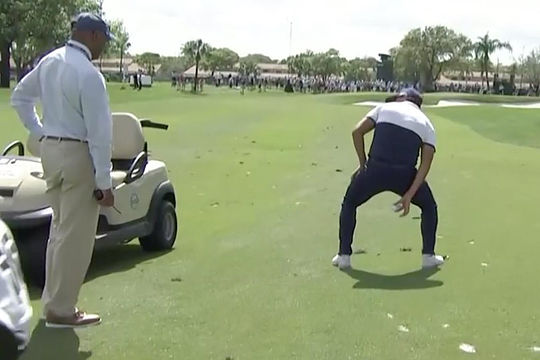 Still he did all but poke fun of the rule at the recent Honda Classic when he took one of the funniest drops you will ever see on a golf course.

Whether or not he had been waiting for a chance to show it, Fowler certainly turned a few heads when he half-squatted and then dropped the ball behind his back from just above knee high.

It looked quite comical but raised the question that maybe Fowler was trying to make a point ridiculing the new rule.

The routine actually began the week before that when Fowler shanked his approach shot on the opening hole of his second round in the WGC-Mexico Championship and on that occasion proceeded to take what used to be a regulation legal should-height drop.

He quickly realised he had made a mistake taking the drop that way and did the right thing by informing a rules official.

Yet reports say the damage was done and Fowler eventually holed out for a triple-bogey seven.

The incident probably should have ended there.

Yet Fowler wanted to make a point and got his opportunity when he was required to take a drop in the first round of the Honda Classic.

That’s where the comedy routine began with his half squat backward drop raising more than a few eyebrows – although deemed quite legal.

Most young golfers would agree Fowler is the coolest guy in world golf and his popularity is unmatched.

Even he might not believe how many kids around the world will be copying his antics.

Certainly it’s a change from all the talk about whether or not to leave the golf flag in while you’re putting.

Now we’re talking and arguing about how we should be dropping the ball.