Fox against Weaver in US Amateur final

Steven Fox will meet Michael Weaver in the final of the US Amateur Championship being played at Cherry Hills Country Club in Colorado.

Fox took advantage of a strong start to beat Chris Williams, the world’s top-ranked amateur, 4&2 in the quarterfinals and followed that with a 2-up win over Brandon Hagy to set up his finals appearance. 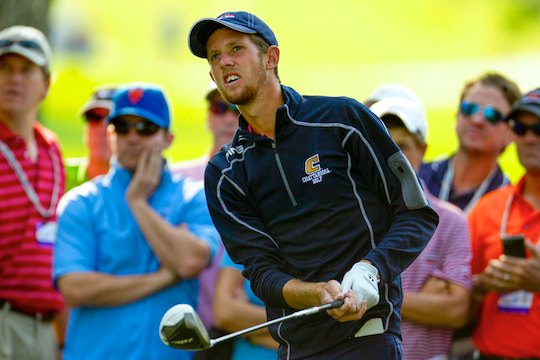 Michael Weaver defeated Justin Thomas 3&2 Saturday to advance to the final after Thomas accounted for Australia’s Oliver Goss, 2-up, in the morning’s quarter final 2-up by winning on the 18th with a tight chip to save par.

The 21-year-old Weaver from California opened his semifinal match with Thomas with three consecutive birdies to go 2-up. He stretched his lead to 5 up after the 10th hole and withstood a rally by Thomas, an Alabama freshman who won three of four holes to get within two of Weaver.

The championship final sees two relative unknowns playing for one of the world’s most prestigious amateur titles after Williams – one of the tournament’s favourites – was eliminated by Fox in the quarter final.

Williams, from Moscow, Idaho, earned first-team All-America honours in 2011 and 2012, played on the US Walker Cup team last year and arrived at the US Amateur on a hot streak, having won the 2012 Western Amateur a fortnight ago in Chicago to claim the world’s number one ranking.

Both Fox and Weaver had emerged from a playoff at the end of two days of qualifying to win their respective spots in the 64-player match-play field.

Fox was the 63rd seed and Weaver the 60th seed.

While Weaver was an honourable mention All-American as a sophomore, he redshirted collegiate golf last season and didn’t play. He’s had some success this summer, but not in any major amateur events.

Fox is ranked 127th among the world’s amateurs and was obviously pleased with his advancement to the final.

“This is by far the best thing I’ve done in my career, by far,” said Fox.

“Whether you’re number 1 or 64, you always have a chance. And it’s awesome how we survived a playoff and got this far. It’s really unreal.”

Fox won last year’s Tennessee Match Play Championship, his biggest amateur achievement to date. Now he has a chance to claim arguably the largest amateur match-play title of them all, after barely making it into the 64-man bracket.