An emotional Ryan Fox has dedicated his stunning Alfred Dunhill Links victory to the memory of the late Shane Warne.

The powerhouse Kiwi golfer came from four shots behind, and at one stage late in his round, ahead of holing a testy four-footer for par at the last in a four-under 68 to win by a shot at 15-under-par on the famed Old Course.

England’s Callum Shinkwin (67) and Swede Alex Noren (69) were joint second on 14-under and with World No. 2 Rory McIlroy the clubhouse leader on 13-under for nearly 90-minutes before Fox claimed the win. McIlroy produced weekend rounds of a pair of 66s to finish top four for the fifth occasion in nine Dunhill showings.

Fox, 35, collected a 14th pro career victory, a third on the DP World Tour and first on European soil, four years after losing out in a play-off for the 2017 Irish Open and also being defeated in a play-off for last year’s Dutch Open title.

However, it was thoughts of the Australian sporting hero, known affectionately as ‘Warnie’, that acted like a 15th club in Fox’s bag. 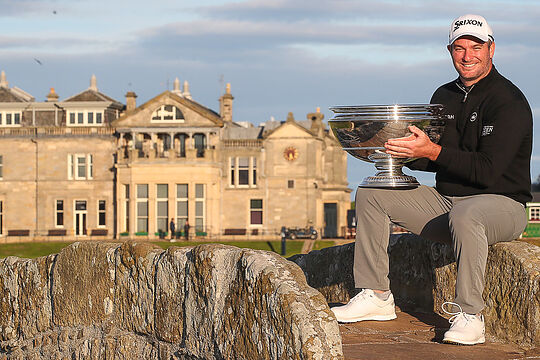 “I definitely feel like Warnie was there with me today,” said Fox. “Obviously I did a few times this week. It’s always been a special week for me. The last four years, I’ve got to play with Warnie who is one of my idols growing up. He absolutely loved this tournament.”

“Last time I saw him, we were here last year, and ran second in the team event on a count back and he was absolutely buzzing and he crashed after too many vodka Red Bulls the night before, as he tended to do around here.”

“He was missed by a lot of people this week, especially me. It was a strange feeling at the start of the week but also felt like he was there helping out and it was certainly nice to do it for him this week.”

And asked what Warnie would be saying now knowing Fox won?

“I probably can’t say what he would be saying to be honest knowing Warnie,”said a smiling Fox. “But he would be also trying to figure out how many vodka Red Bulls we could get in that trophy, which I’m thinking is quite a few.”

Victory earned Fox a first prize cheque of $US 816,000 while the win will see him move inside the top-50 on the World Rankings to World No. 46 and needing to remain inside the top-50 by year’s end to be assured of a maiden invitation to next year’s 2023 Masters.

“I certainly hope that’s the case as the Masters is the one major I haven’t ticked off yet so that would be pretty cool to get that in the mail,” said Fox. “Obviously I would love to keep playing how I’m playing at the end of the year.”

“When I started the year, I think I was well outside of 200 in the world, so to even be talking about going to the Masters is pretty incredible. I have a couple of mates I made a bet with a long time ago that I would take them there, so I’ll be expecting a few texts later on tonight when they wake up.”

More immediate, Fox’s win lifts him to seventh on the DP World Tour Race to Dubai that ends next month in Dubai

“I guess after the good run I had in the middle of the year, that was always the goal, to give myself a chance going into Dubai,” he said. “It’s pretty cool to have that. Obviously a couple of pretty good players on that ranking list, so I’ll have to do something even more special to get ahead of those guys but just to be in the mix is pretty good.”

Two months after the bitter disappointment on the same course of missing out a second Open Championship and McIlroy, who was leader in the clubhouse for near on 90-minutes, eventually signed for a second straight round of 66 for a share of fourth place at 13-under

McIlroy had spoken on Saturday that he probably needed a 64 to have any chance and that proved correct with his 66 in the end two shots shy of forcing a play-off.

“I stood talking to you yesterday afternoon and I said, 64 might have a chance and it looks like I might come up a couple short,” said McIlroy. “So that was a decent target.

“I played well again today. I did everything that I wanted to do. I didn’t make birdie on 14 which sort of halted the momentum that I had, and then it was a bit of a struggle on the way in. It was nice to birdie the last.”

David Micheluzzi lead the way for the Australians finishing in a share of 36th place and 5-under with Maverick Antcliff (T61) the only other Aussie to make it through four rounds.