Ryan Fox made it two Kiwi wins on Australian soil on Sunday when he claimed the Coca-Cola Queensland PGA Championship in brilliant fashion at Toowoomba’s City Golf Club.

While Lydia Ko‘s victory at the Women’s Australian Open was a more gritty affair in challenging circumstances, Fox’s had an enormous dose of the dramatic as he used his prodigious length to good effect to conjure up consecutive eagles at the 16th and 17th holes for a final round 8-under 62 to prevail by a stroke from Matthew Millar and Cameron Smith. 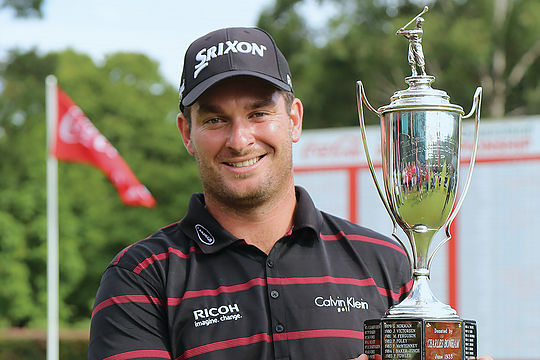 “I am pretty ecstatic right now to be honest,” said Fox, who finished the weather-affected event at 17-under 263. “I was around the lead all day. To do what I did on 16 and 17, just….I really can’t describe it.”

“16 is certainly not one, standing on the tee, that you think you are going to hit on the green. But I just figured I needed to do something. I aimed at the green, and hit driver as hard as I could, I managed to hit it to eight feet and knock that one in.”

“I thought maybe at best I would get it 10 short of the green but a little bit of adrenaline helped.”

“On 17, I hit two really good shots into the green and got a good read from Snow, a local guy who caddied for me over the weekend. I guess I went from two back to one in front after two holes, it was a bit surreal.”

Queenslander Smith also played superbly on Sunday with a final round of 7-under 63 to secure a runner-up finish alongside Millar on 16-under, three ahead of Japan Tour regular Brad Kennedy and Tim Hart.

The victory was Fox’s second on the PGA Tour of Australasia and fills him with tremendous confidence ahead of his return home to contest the Holden New Zealand PGA Championship to be played at Remuera Golf Club from 5-8 March.