France’s Celine Boutier saved her best until last storming home on Sunday with a final round 63 to win the ShopRite LPGA Classic buy a stroke over South Koreans Jin Young Ko, Inbee Park and Canadian Brooke Henderson for the second LPGA Tour title of her career.

The victory comes just two starts after a win in her native country at the Lacoste Ladies Open de France on the Ladies European Tour. 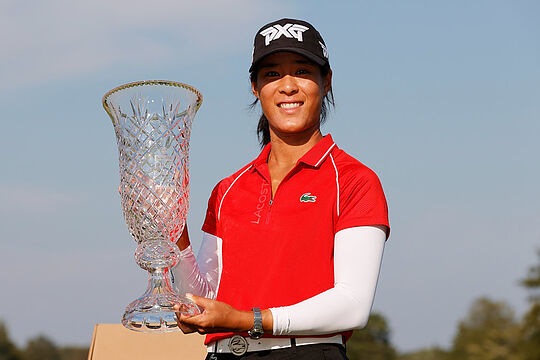 On a final day when many players scorched the layout with low scoring, Boutier was able to come through the crowd.

“I knew the course was scorable and that I had to shoot a low score to even have a chance,” said Boutier.

“Then after No. 18, I had left everything on the course. But a couple of groups were left out there. I was expecting to go into a playoff. It was already in my mind having to prepare for that. The fact that neither Jin Young nor Inbee birdied 18 really left me kind of stunned. I’m still a bit surprised about it.”

Boutier certainly did finish with a flurry with birdies on two of her last three holes to hold off a playoff. Her previous LPGA Tour win was the 2019 Vic Open in Australia, two weeks before the LPGA Tour was shut down by the coronavirus pandemic.

“It feels like my first win in Australia was so long ago,” said Boutier. “I’m just over the moon.”

Boutier won US$262,500 for the victory and surpassed the US$2 million mark in career earnings with $2,164,532. The win sees the 27-year-old matching Patricia Meunier-Lebouc and Anne-Marie Palli for most wins by a French golfer in LPGA Tour history.

Su Oh finished the best of the Australians in a share of 7th position at 10-under, four shots short of Boutier. Katherine Kirk finished in 34th position, with Sarah Kemp in 44th.

Hannah Green rounded out the Australians who made the weekend.