France’s Perez takes the early lead in Race To Dubai

The French tricolour seems to be a regular fixture of late on European Tour leaderboards.

Four days after Antoine Rozner became the latest French champion, fellow countryman, Victor Perez, muscled his way to the top of the board on day one of the season-ending DP World Tour Championship in Dubai. 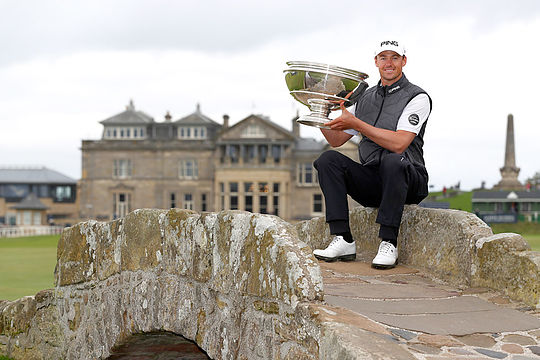 The Dundee-based Perez posted an opening 67, which sees the current No. 6 on the Race to Dubai immediately projected to finish at No. 1 should he retain his place ahead of the 65-player field competing in the $US 8m event on the Earth course at Jumeirah Estates.

Leading Race to Dubai money-earner Patrick Reed, who is looking to become the first American in the 48-year history of the European Tour to win the year-end title, holed a gem of a birdie at the last much to the delight of a packed corporate box behind the green, to be just three off the lead thanks to a two-under par 70.

Though they’re all chasing Perez.

Last year’s Alfred Dunhill Links champion had six birdies in his round with his only dropped shot coming at the fourth hole.

“As always on these tough courses, tough pins today, they really put up a good setup with some of the pins,” said Perez, who has twice finished as a runner-up in Rolex Series events this season.

“It was just about holing a few good putts, driving the ball well, doing everything fairly well but obviously making a few putts, which you need those types of days.”

“In the position I’m in, I have nothing to lose. I have everything to gain. So for me it’s really a going-for-it mentality that I have to keep for four rounds.”

Reed began the week with a 460-point lead over Fleetwood in the standings, but with 2,000 points on offer to the winner it is mathematically possible for 61 of the 65-man field to finish top of the money list and claim the Harry Vardon Trophy.

MacIntyre was last year crowned ‘Rookie of the Year’ and a year on he’s knocking loudly on the door for a European Tour No. 1 and, if successful, he would be the first Scot since Colin Montgomerie in 2005 to win the Race to Dubai.

Fitzpatrick won the DP World Tour Championship in 2016 to eclipse Sir Nick Faldo’s record as the youngest Englishman to win three times on the European Tour, but finished only sixth on the money list behind Open champion Henrik Stenson.

“To be able to have a chance to win the Race to Dubai despite everything that’s going on is amazing and absolutely I’d be delighted if I could take the opportunity that I have,” said Fitzpatrick.

Despite the likes of Adam Scott, Lucas Herbert and Min Woo Lee qualifying for the season-ending tournament, understandably no Australians made the decision to attend.