Marcus Fraser fired a bogey free 7-under-par second round to lead the 2011 Australian PGA Championship at Coolum at 11-under-par.

Bubba Watson at one stage made it to 10-under-par, but three bogeys across the final five holes has the American at 9-under-par and one ahead of Kyung Tae Kim from South Korea. 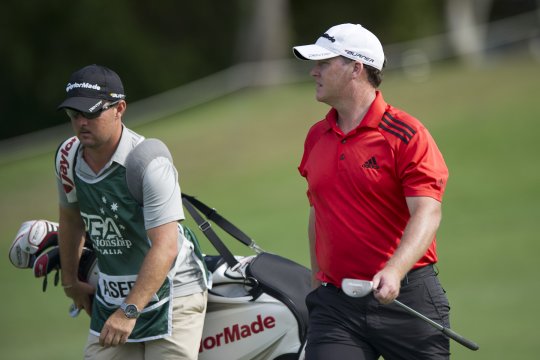 Marcus Fraser fired rounds of 68-65 to be at 11-under-par an leading the Australian PGA Championship. (Photo: Anthony Powter)

For the last nine years, Fraser has plied his trade on the European Tour with considerable success on the Challenge tour, where he is a multiple winner.

Fraser turned professional in 2002 and a year later won three tournaments in one month – Danish Open, Talma Finnish Challenge and the Russian Open.

Fraser has maintained his playing status since, consistently finishing inside the top 120 on the Order of Merit, with a best of 51st place in 2004.

His biggest win was in the 2010 Ballantine’s Championship with a closing 69 to finish four shots clear.

Despite success overseas, the boy from Cowra in country New South Wales would like nothing better to win an Australasian PGA Tour event.

“If I was to win the Australian PGA Championship, it would be huge,” said Fraser after his second round.

“There’s a lot of good players in contention and anything can happen. I’m glad with where I’m placed.”

Y.E. Yang, John Senden, Adam Scott and Robert Allenby are in a tie for 4th at 7-under-par, four behind and within striking distance of Fraser.

Allenby, whose performance for the International team at last week’s Presidents Cup was the subject of discussion for days, opened with a three-under-par 69 which did much to erode the disappointment of last week.

A second round 68 has the Victorian back in the mix and quashed some of the criticism of being the only player to not score at least a point for the International team.

“Obviously I hit a couple of bad shots in there that caused bogeys,” said Allenby in defence for his performance at Royal Melbourne.

“I am not hitting the ball bad. I am not playing that bad.”

“I am sick of everyone saying ‘what a slump you’re in’. I shot eight under in the first round of Malaysia a few weeks back. Golf is a fickle game. There is a fine line between greatness and not. But who knows?”

John Senden and Greg Chalmers each made a hole in one on consecutive days, in the same group, on the same hole – the 158 metre 2nd at Coolum.

With twenty players within six shots of Fraser this Australian PGA Championship is bound to deliver a few surprises as the weekend unfolds.

The stage is set for a riveting weekend with a mixture of Australian and internationals in the mix for the championship title.