Australian veteran Marcus Fraser had clung on to the first round lead of the Alfred Dunhill Links Championship for several hours, when England’s Matt Wallace caught him with almost the last shot of the day.

Fraser had scored an impressive 68 at a very windy Carnoustie and had sat back and watched as many of the top names in world golf had failed to match him. 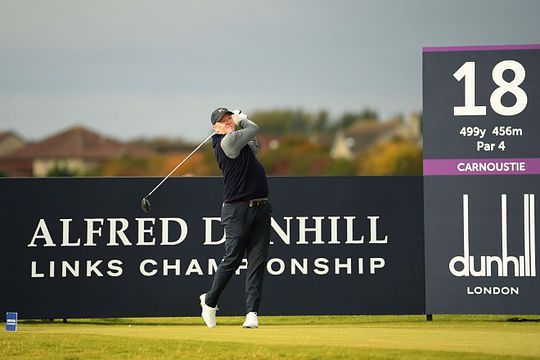 But Wallace, playing at St Andrews, sank a birdie putt on the famous 18th hole of the Old Course to share the lead.

Wallace has had a highly successful year, winning the Hero Indian Open, the BMW International Open and the Made in Denmark event, as well as finishing tied 19th in the US PGA Championship, his first Major, which included a memorable hole-in-one.

Earlier 40-year-old Fraser had said: “It was a good day. On Carnoustie it’s hard to keep it in play sometimes and all the bunkers are just in the perfect spot. Luckily enough I avoided all of them, apart from one.

“The more you play this tournament the more you fall in love with it. It’s an amazing event. I just love playing it every year.”

On a very congested leaderboard there are 22 players within three shots of Fraser and Wallace, including some of the top names in world golf.

Two-time winner Padraig Harrington is just one shot back, US Open and US PGA champion Brooks Koepka and Tyrrell Hatton, going for a third straight victory, are two behind with Australia’s Lucas Herbert, while many people’s favourite Tommy Fleetwood is a further shot back. All were playing at Kingsbarns.

Harrington, winner in 2002 and 2006, looked as if he might catch Fraser after three birdies in five holes, but he missed the chance for a fourth on the par five 9th hole, his 18th.

Koepka said of his 70: “I felt like I made a few mistakes. Just got to move on from it.”

And 2016 and 2017 champion Hatton added: “It was a tough day. I’m just glad to finish under par. I’m hoping Carnoustie will not be so windy.”