Australian Marcus Fraser curled home a clutch 18-foot par putt on the last green to lift the inaugural US$3 million Maybank Championship Malaysia by two shots on Sunday at the expense of a heartbroken Soomin Lee of Korea.

Fraser trailed overnight leader Lee throughout the final round at a sun-kissed Royal Selangor Golf Club before taking full advantage of his young rival’s late collapse to claim a third European Tour victory in the event co-sanctioned with the Asian Tour.

The 37-year-old Aussie, who also ended a frustrating six-year title drought, signed off with a three-under-par 68 for a 15-under-par 279 winning total, earning him a champion’s cheque of US$500,000 along with a magnificent Maybank Championship Malaysia trophy crafted in the shape of a Tiger.

Baby-faced Lee, 24, led by three at the start of the day and looked very much in control until a double bogey on 16 following an errant drive allowed Fraser to draw level.

Tied heading into the final hole, the Korean missed his long par attempt on the last green before watching Fraser drain his putt.

Lee then failed to convert his return putt for an eventual six and a closing 73 which left him tied for second place with Filipino Miguel Tabuena, who closed with a solid 68. 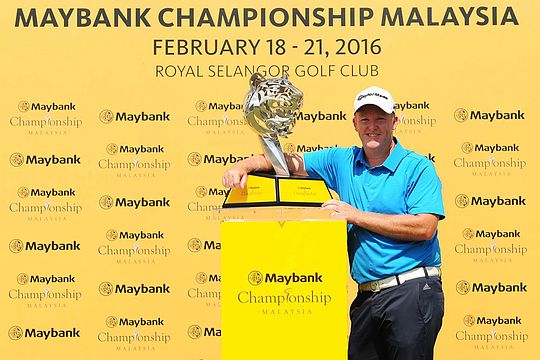 “Unbelievable,” said Fraser, who also shot to the top of the Asian Tour Order of Merit after taking up membership at the start of the week.

“Six years since the last one. My kids keep saying every time I walk out the door ‘hey dad, can you bring home a trophy? And I’ll say I’ll try, I’ll try and this time I’ll take one home and I’ll get them to take it to school for show and tell. It’s going to be pretty cool. That’s the main reason why I wanted to win.”

“On the last, I don’t know how I got that one to go in. I was very nervous and looking down on the putt, I could see my putter shaking. But I just said to myself that this is one opportunity for me to win and I took a few deep breaths and holed the putt.”

A teary-eyed Lee was disappointed with his late wobble which denied him a maiden victory but preferred to take in the positives after contending at the Maybank Championship Malaysia.

“This week is very good for my golf life but I’m a little bit disappointed. But it is okay because I have many more tournaments to try and win. I have three top-10s in three events now, so it is okay,” said Lee, whose US$260,565 runner-up cheque pushed him up to third place on the Asian Tour’s Order of Merit.

“Holes 16, 17 and 18 are very important on this course. I was very nervous and felt pressured. I missed some short putts and that’s why I finished second. I still have one more tournament in Perth next week, so I hope to play well again.”

The 21-year-old Tabuena was delighted to finish joint runner-up after struggling with food poisoning in the opening two days. He was only one of six players who birdied the closing hole, which earned him his career best pay day of US$260,565.

The in-form Nathan Holman, who lead the opening two rounds, faltered over the weekend with back to back rounds of 73 and 72 to finish in outright 8th place.