Marcus Fraser has claimed the 2021 Gippsland Super 6 crown at Yallourn Golf Club after narrowly overcoming Swiss Alessandro Noseda by a stroke in the six hole final.

Fraser, 42, is a three-time winner on the European Tour yet Sunday’s win was his first Australasian Tour title since turning professional in 2002. 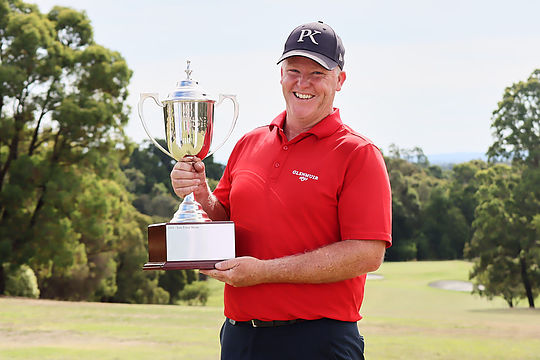 The New South Welshman missed the 2011 Australian PGA Championship in a playoff with Greg Chalmers and missed out in another playoff to Rod Pampling at the 2008 Australian Masters.

The win was even more special for Fraser as it was the first time he could share the victory with his family.

“I promised the kids they could see the trophy before they go to bed so I’ll do that,” said Fraser.

“They see all the ups and downs now of what I do so it’s nice to give them a little treat and bring them something home. Sometimes you’re crying out for a break but when it’s actually taken away from you and you can’t do it you actually realise how much you love doing what you do.”

“COVID has probably taught a lot of us that once again. I genuinely love playing golf and it’s great to be back out on the course competing. That’s what we do. That’s our DNA, what we love doing.”

South Australia’s Peter Cooke took third position with former British Amateur Champion Bryden Macpherson taking outright 4th. Macpherson has no status on the Australasian Tour and only recently returned to Australia from the US, yet remains optimistic about his playing future.

“It’s never been more likely that I’m now in a position where I can play at a higher level more often,” said Macpherson.

“This is good for me. I have never had a golf tournament where I feel like I can control my ball for 72 hole…and stick to the same thing for 72 holes.”

The PGA Tour of Australasia now moves on to Rosebud Country Club for the inaugural event in The Players Series to be hosted by former US Open champion Geoff Ogilvy.