Chile’s Felipe Aguilar made European Tour history by holing his approach shot for eagle on the final hole to steal a one-stroke victory at The Championship at Laguna National in Singapore.

The 39-year old produced a sensational two-two finish to deny Anders Hansen, following a birdie on the par-three 17th hole with a superb wedge from 142 yards that flew straight into the hole on the 18th hole. 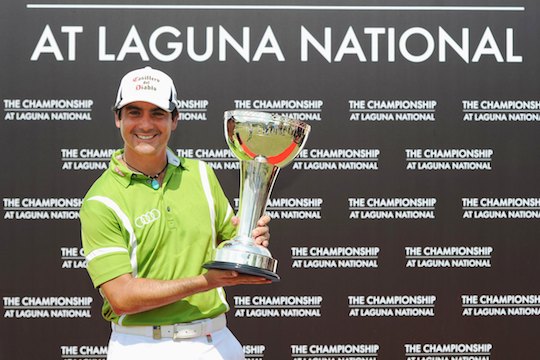 It is the first time a player has won a European Tour event by holing his second shot on a par-four finishing hole.

“On the 17th green, I told my caddie if I make a birdie on 18, I might put some pressure on the leader.” Aguilar said. “He said you might make two. I looked at him and said the way I’m hitting the ball, I might make two and I did.”

“It’s very, very special. I didn’t think I had made it until my caddie came back and told me and the other players congratulated me. That was the cherry on the cake, definitely.”

After two birdies on the front nine, Aguilar came back in just 28 shots for a stunning ten-under final round of 62 to finish at 22-under, one shot clear of American David Lipsky (65) and Hansen.

The Dane dropped a shot on the 16th hole just moments after Aguilar’s final hole theatrics before parring the final two holes for a closing 67.

Hansen had lead for much of the final round in search of his first victory in over five years on Tour. “He finished two, two. It’s just one of those days. He had a good day, and played well obviously. I thought I played well too.” said the Dane.

“If you go out last group and shoot 67 and finish -21, you think you’re in with a chance but you come up short. That’s just life.”

With his freakish finish, Aguilar broke a drought of his own for his second victory on the European Tour, following his maiden title at the Indonesian Open in 2008.

Terry Pilkadaris was the best of the Australians at 14-under in a tie for 11th ahead of Scott Hend and Scott Barr (T24), Wade Ormsby (T36) and defending champion Brett Rumford (T51).

The European Tour now shifts to Continental Europe for this week’s Madeira Islands Open in Portugal.