Alexander Levy secured his first European Tour title after a turbulent final round at the Volvo China Open.

The Frenchman became the 20th different winner of the event in its 20th staging despite seeing a five shot lead reduced to one on the back nine. 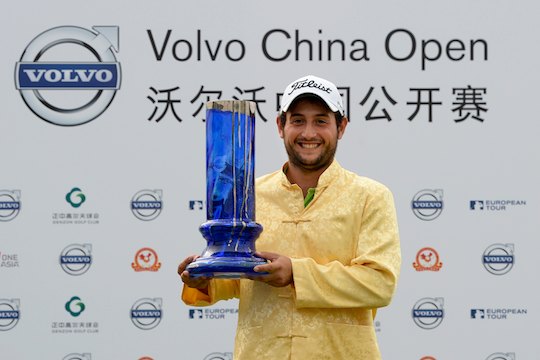 A strong finish form the 23 year old saw him card a closing 69 for a 19 under par total – four clear of England’s Tommy Fleetwood.

Having started the day three clear, Levy looked to be strolling towards the kind of decisive victory he eventually produced for much of the final round, before a messy double bogey at the 15th threatened to derail his chances.

Spain’s Alvaro Quiros finished third on 13 under after a closing 72 – the big-hitting Spaniard’s best European Tour finish since winning the 2011 Dubai World Championship.

Italy’s Francesco Molinari was a shot further back in fourth courtesy of a 67, with world number three Henrik Stenson, Ryder Cup star Ian Poulter and Anders Hansen, who produced a best-of-the-day 63, sharing fifth.

Levy was not the only prize-winner on the final day, with England’s Danny Willett picking up a new Volvo for a hole-in-one at the 12th.

Terry Pilkadaris and Scott Strange finished the best of the large Australian field in T24. Defending champion, Brett Rumford, finished a distant T63 at 3-over with rounds of 68, 75, 74 and 74.