South African Dylan Frittelli won the John Deere Classic on Sunday, closing with a 7-under 64 for a two-stroke victory over Russell Henley. The win earned Frittelli a spot in this week’s The Open Championship, finishing at 21-under after a bogey-free final round at TPC Deere Run.

Frittelli, who opened with rounds of 66, 68 and 65, began the final round with three straight birdies and capitalised on his round with the equal second best round of the final day. The 29-year-old PGA rookie clinched his maiden PGA Tour victory since turning pro in 2012 with a birdie at the par-5 17th hole.

Frittelli’s previous best finish was 11th at the 2018 Honda Classic.

“I knew I had to come out here and make a bunch of birdies today,” said Frittelli. “Nothing was going to change that, whether I was four shots back or one shot back. It had no bearing on how I had to play today. Luckily, I managed to have that mindset overnight. And when I got going, I felt really comfortable.”

A 2012 Texas Longhorns national championship golfer, Frittelli can now focus upon the US having played mostly in Europe, and this was just his 33rd PGA Tour start. 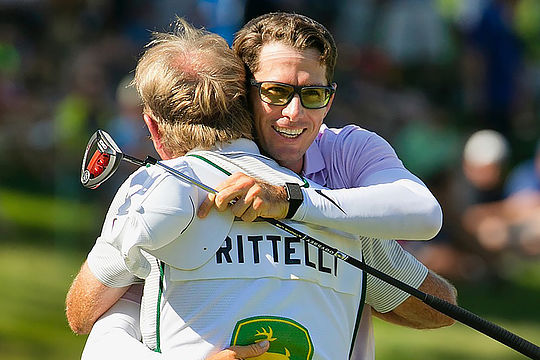 The win also provides job security on the PGA Tour for somebody who was well outside the top-125 in the FedEx Cup. It also sees him collecting more money than he’d won in his entire PGA Tour career combined.

Henley, who teed off well before the leaders finished two strokes back of Frittelli at 19-under overall. His last push of 61 was the lowest final round at the tournament since 1983.

Cameron Davis was the best of the Australians finishing in a share of 53rd position after entering the week missing three of his last four cuts. Davis carded all four rounds under par in his tournament debut here.

John Senden was the only other Australian to make the weekend, finishing in a share of 70th position. The 2006 John Deere Classic winner made his 15th start in the event, where he owns four top-25 finishes.

Luck, a former US Amateur Champion, has missed four of his last five cuts this season on the PGA Tour to be sit at 165th on the standings.

His sole top-10 result came at the Zurich Classic of New Orleans, where he partnered with Hank Lebioda for a T5 finish.