The Challenge Tour graduate carded six birdies and a single bogey on Sunday to get to 12 under par and finish one shot clear of nearest challengers Mikko Korhonen, David Horsey and Jbe Kruger. 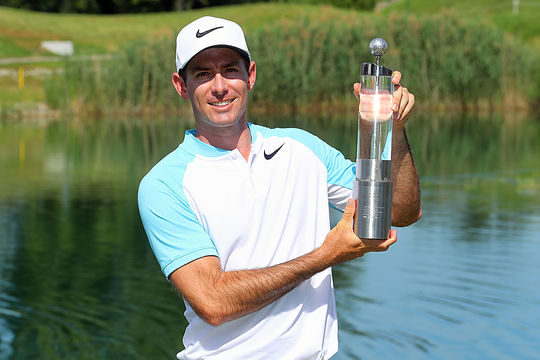 Austria has proved a happy hunting ground for Frittelli, who won his first Challenge Tour event here four years ago at the Kärnten Golf Open presented by Mazda.

And after suffering play-off heartbreak in the Volvo China Open in April, the 27 year old now has a European Tour title to his name.

Frittelli began the day on seven under, two shots behind overnight leader Felipe Aguilar – who had led after each of the opening three rounds – but made gains at the first and third to grab a share of the lead.

Frittelli was joined at the summit by Mikko Korhonen after he carded his fourth birdie of the day at the ninth, but the South African knocked in his 15 foot putt at the ninth to get to 11 under and go one shot clear.

Frittelli dropped his first shot of the day at the short 14th to sacrifice his outright lead and Kruger made back-to-back gains at the 15th and 16th to knock his countryman off the top of the leaderboard altogether.

But Frittelli fired his sixth birdie of the day at the 16th to get back to 12 under before saving par from eight feet at the next.

With Kruger dropping a shot at the last, Frittelli stood at the 18th tee with a one-shot lead, and he knocked in his close-range par putt to secure the trophy.

“I’m really happy with the way the week went – super stoked to get my first win on the European Tour – I think it’s been a long time coming and I am glad to be inside the winner’s circle.”

“Hopefully I get into The Open with this performance and it should move me up the Race to Dubai and open up some more doors down the road.”

Ryan McCarthy finished the best of the small Aussie field this week in equal 23rd and nine strokes from the lead. Terry Pilkadaris (T43) and Brett Rumford (T57) were the only others to make it through to the weekend.