Japan’s Hiroyuki Fujita gave the home fans something to savour by carding a near-flawless final round five-under-par 66 to win the Asia-Pacific Open Golf Championship Diamond Cup on Sunday.

Now in the veteran category but playing with youthful exuberance, Fujita won his third event of the Japan Golf Tour season in an event co-sanctioned with the Asian Tour by two strokes, recording a total of six-under-par 278. 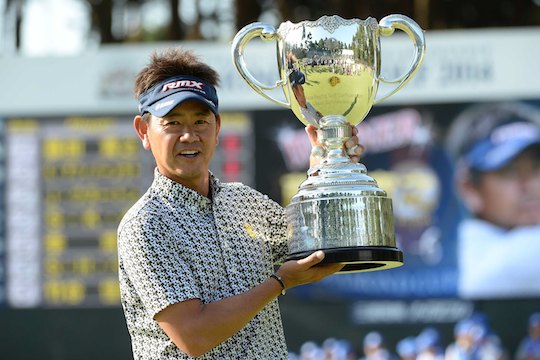 Returning from a lengthy absence with a knee injury, Thailand’s Kiradech Aphibarnrat quickly slipped back into the groove to sign for a final round 67 to share second place with Korea’s S.K. Ho and Jason Knutzon of the United States.

Korea’s Baek Seuk-hyun carded a 69 to tie for fifth place alongside compatriot Lee Kyoung-hoon and the Japanese pair Yoshitaka Takeya and Yoshinobu Tsukada.

Starting the day four shots off the lead, Fujita exploded from the blocks with a birdie at the 1st followed by more at the 6th and 9th. He surged to the top of the leaderboard with further birdies on 11 and 15 but a bogey on the par-four 17th tempered his run.

However, Fujita bounced back immediately to close the door on his rivals with another birdie on the last hole to win his 18th title on the Japan Golf Tour.

“This win is especially rewarding as it was against a top field that includes players from the Asian Tour. I saw lots of happy faces among the crowd too and I’m glad my victory made it a special day for them,” said Fujita.

The talented Aphibarnrat was proud of his performance after six weeks on the sidelines, recording his best finish on the Asian Tour this season.

“I started off too slowly as I was still finding my way around. But today’s result is an indication of my ability to stage a fight back.”

A trio of Australians – first round leader Cameron Smith, Adam Bland and Scott Strange – finished in a log jam of players tied for 9th at two-under par.

NSW’s Dimi Papadatos finished tied for 28th at one-over while Kieran Pratt, Marcus Both and Scott Hend filled minor places further back in the field.