Japanese veteran Hiroyuki Fujita has earned his second win of the Japan Golf Tour season with a playoff victory over China’s Wenchong Liang at the KBC Augusta tournament in Fukuoka.

The 45-year old was not even in the leader’s sights as the final round teed off, a whopping six strokes behind overnight leader Hyung-Sung Kim. 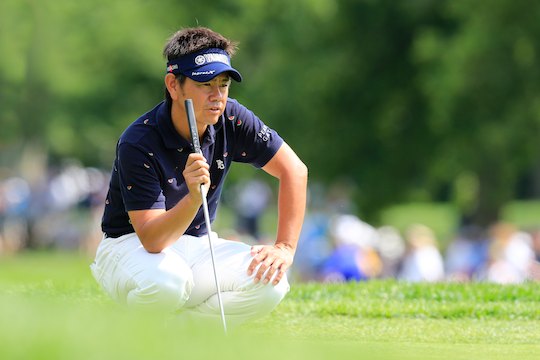 However a seven-under par 65 from Fujita, the equal low round of the day, and a three-under 69 from Liang to Kim’s 72 saw the lead change hands with a playoff required to split the pair tied at 12-under.

Fujita was ranked inside the world top 50 during a four-win season in 2012 yet despite winning at the Tsuyura Open in April, his ranking had slipped to No. 257 before notching his 17th career victory on Sunday.

Kim had to settle for a share of third with three other players, a shot behind Fujita and Liang.

Australian Adam Bland was one of three players to share the low round of the day with a 65, which catapulted him from outside the top thirty into a tie for 7th at 10-under.

Bland earned a little over AU$33,000 for his second top ten of the year and is now the highest ranked Australian on the Money list with nearly $140,000 in earnings from nine starts.

Kurt Barnes and Steve Conran (-1) were the only other Australians to make the weekend cut, finishing tied for 48th.

Next week’s event on the JGTO is the Fujisankei Classic, set in the shadows of Mount Fuji in Shizuoka.