Despite a slow start during the final round of the US Senior Open, Jim Furyk closed with a 1-over-par 71 to take the major title by three strokes over Retief Goosen and Mike Weir at Omaha Country Club.

Furyk finished at 7-under in his debut in the event to become the eighth player to win both the US Open and US Senior Open, the same feat achieved by such greats as Jack Nicklaus, Arnold Palmer, Lee Trevino, Billy Casper and Gary Player. 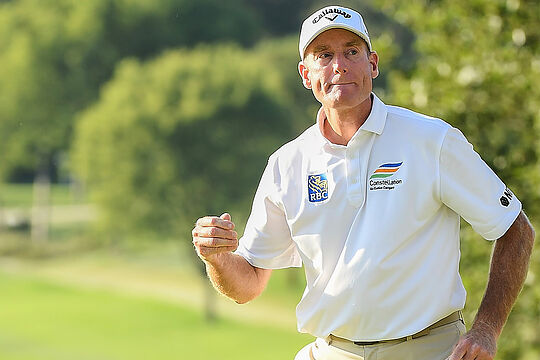 Furyk, 51, won the US Open in 2003 and is a 17 time winner on the PGA Tour. On the Champions Tour he’s played in three majors with a tie for 16th at the Senior PGA and a 6th place finish at the Senior Players Championship. Furyk became the 10th player and second in a row after Steve Stricker in 2019 to win the US Senior Open in his debut.

He nearly holed a long putt from 20 metres on the final hole before tapping in for par, giving him his third victory as an over-50 player and first senior major.

“I’m not sure I ever felt comfortable out there,” said Furyk, whose middle rounds of 64-66 tied the championship scoring record. “This is a dangerous golf course – you’re not worried about making low scores; you’re worried about making ‘others.’ I just tried to worry about my own game, and on No. 17 it was a relief to see where I stood and know that a 4 or 5 on 18 would win the tournament.”

Since joining the PGA Tour Champions last year, Furyk now has three wins on the senior circuit after winning his first two starts, the Ally Challenge in August and September’s PURE Insurance Championship via a playoff against Jerry Kelly.

In 2010, he was the FedEx Cup champion and PGA Tour Player of the Year. Furyk still holds the record for the lowest score in PGA Tour history, a round of 58 which he shot during the final round of the 2016 Travelers Championship.

Weir and Aussie Rod Pampling both made birdies on the 18th hole to complete 3-under 67s, the best rounds of the day. Pampling finished solo fourth at 3-under, while 2010 US Senior Open champion Bernhard Langer and Kevin Sutherland were the only other players under par, in a tie for fifth at 1-under.

Pampling’s finish securing him a very nice payday of US$191,407. The Queenslander’s best finish on the Champions Tour is a 3rd at the Cologuard Classic earlier this year, and to date Pampling has earned just over US$1million in tour prize money.