Jim Furyk became just the sixth player in PGA Tour history to shoot a 59 during the second round of the BMW Championship today.

Furyk, who started on the back nine and made the turn in a sizzling 8-under 28, drained a 3-foot putt on the 9th, his final hole, to card the 59 and move into a tie with Brandt Snedeker for the lead at 11-under. 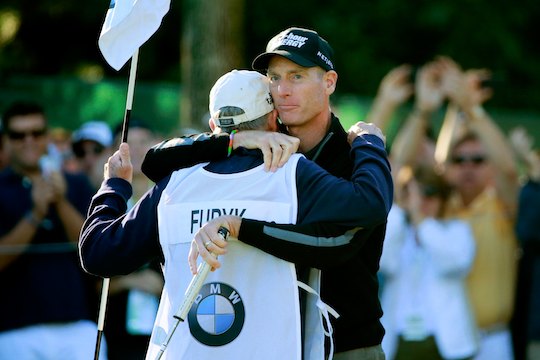 Jim Furyk celebrates with his caddie Mike “Fluff” Cowan after putting on the ninth green to shoot a 59 during the second round of the BMW Championship (Credit: Sam Greenwood/Getty Images)

Hitting fourteen of fourteen fairways and averaging 239 metres off the tee, not long by modern day tour standards, it was Furyk’s crisp iron and wedge play and his putting that got the job done with the world number 15 hitting 100% of greens in regulation and needing just 23 putts.

“It’s a magic number,” said Furyk during his post round television interview.

Aussie Stuart Appleby was the most recent to shoot a 59 in a PGA Tour event, at the 2010 Greenbrier Classic.

Aussie Jason Day pushed his way into the top-10 after a five-under, 66, left him at five-under in a tie for 9th, while Adam Scott slipped down the leaderboard after a 73 dropped him to two-under for the tournament and in a tie for 17th.

Matt Jones (70) joined Scott in a tie for 17th to keep his slim hopes of survival alive (the top-30 points leaders advance to the Tour Championship next week), while Marc Leishman (70) remained at two-over in a tie for 45th.

Defending champion Rory McIlroy carded 77 for a two-round total of 13 over on a day he would rather forget.