Jim Furyk as grabbed the lead at the PGA Championship with a third round 68 to be at 9-under-par, a stroke ahead of fellow American Jason Dufner.

Sweden’s Henrik Stenson and Jonas Bilxt are in second and third place respectively, with Stenson at 7-under and Bilxt at 6-under. 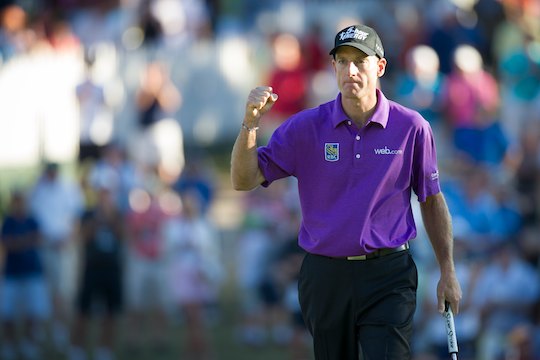 Jim Furyk leads after the third round of the US PGA Championship at Oak Hill (Photo: Anthony Powter)

Adam Scott, who was in a three way tie with Furyk and Matt Kuchar after the second round struggled with the putter today as he carded a third round 2-over-par 72 to sit at 5-under, four strokes behind Furyk.

Furyk has been in the box seat before in majors most recently at the 2012 US Open when he co-led after the third round with Graeme McDowell at Olympic.

Furyk faltered then, famously in fact, but in tomorrow’s final round the 43-year-old will have a chance to turn the tide. 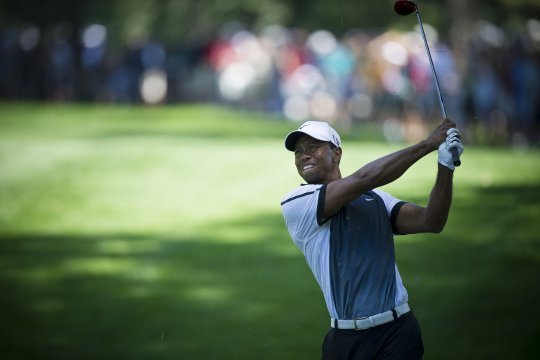 Tiger Woods follows his approach into the 2nd during the third round of the US PGA Championship at Oak Hill (Photo: Anthony Powter)

“I think I need to treat this as an opportunity,” said Furyk.

“You know I am not in the grave yet. I’m going to have more opportunities ahead of me in my mind.”

“There is going to be a winning score tomorrow, and whatever the score is, it means I don’t have to shoot as low as everyone else and I’ll go out to post a solid round and hope it stacks up well.”

It’s been 10 years since Furyk won the US Open and historically he has not played well at these championships, his best finish was a T6 in 1997 and he hasn’t been inside the top 10 since 2002.

Furyk took the third round lead through a 15-foot putt for birdie on the 17th and then a saved par on the 18th with a putt from the fringe which was punctuated with a rare sign of emotion as Furyk fist pumped the air after the putt sunk.

Woods, who started the day ten strokes off the pace, immediately fell further behind when he bogeyed the par-four first, missing the fairway to the left and failing to reach the green in regulation.

The world number one is in a tie for 48th position after a third round 73 to be at 4-over for the championship.

Marc Leishman is the next best Australian behind Scott with the Victorian at even par and in a share for 21st position along with Jason Day.

Marcus Fraser fired a third round 75 to slip down the leaderboard in to a tie for 28th.

The two remaining Australians to make the weekend are well down the leaderboard, with John Senden at 5-over (T52) and Matt Jones at 6-over (and in a tie for (T63).