It is no coincidence that two of the Tour’s most accurate drivers of the golf ball are leading the US Open following the third round at Olympic Club in San Francisco.

Jim Furyk and Graeme McDowell are at 1-under-par for a two stroke margin over Fredrik Jacobson after the Swede moved into contention with a third round 68. 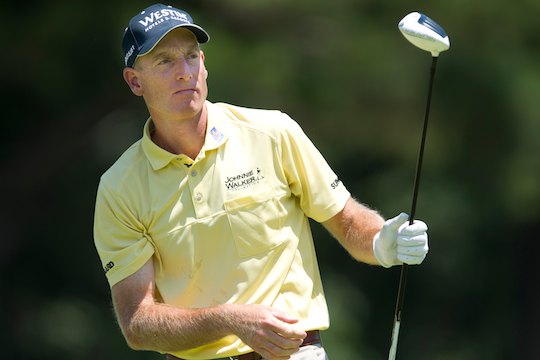 Jim Furyk shares the third round lead of the US Open with Graeme McDowell at 1-under, two ahead of Fredrik Jacobson of Sweden (Photo: Anthony Powter)

Tiger Woods started the day tied for the lead, at one under par, with David Toms and Jim Furyk.

By the third round’s end, Woods was tied for 14th, five strokes behind Furyk and McDowell, the 2010 champion, who posted a two-under 68 for a 54-hole total of one under.

Furyk is ranked second in driving accuracy percentages hitting the short grass an impressive 72% of the time. McDowell might not be overlong off the tee at 257 metres, yet makes up for it with hitting over 73% of fairways to be the most accurate driver on tour.

With Olympics swaggering dog-leg fairways and challenging greens McDowell arguably is the better putter of the two and this should serve the Norther Irishman well as he goes in pursuit of his second US Open title after winning the championship in 2010 at Pebble Beach.

“It’s a tough course. You’ve really got to execute shots well. You’ve got to keep the ball on the correct side of the pin. And you’ve got to play well.” 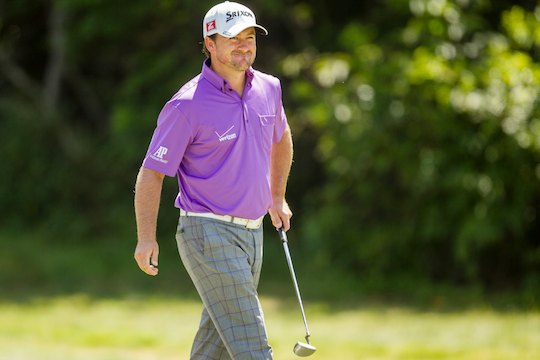 Graeme McDowell walks on the first green during the third round at the 2012 U.S. Open (Copyright USGA/Steve Gibbons – Courtesy of www.usga.org)

According to McDowell the championship remains right open with a number of players capable of securing the trophy.

“I look at the leader board, and I see Tiger’s name, but I see other great names there, as well, Lee Westwood and David Toms and guys who know how to get the job done.”

“I think 4 over is about as far back as you can look. It’s fairly crowded. I think someone will go and shoot 69 or 70 tomorrow and get the job done.”

Furyk was in the same state of mind regard his chances of claiming a second US Open title after winning in 2003.

“Graeme and I are tied for the lead, but there’s a bunch of people piled up and close to it,” said Furyk.

“Obviously, I like being up front in the position I’m in. The golf course will take its effect on a bunch of people. It is the guys that go out there and deal with the conditions and the situations the best and find a way to get through those difficult holes with par and limit their bogeys will have an opportunity to win the last few holes. 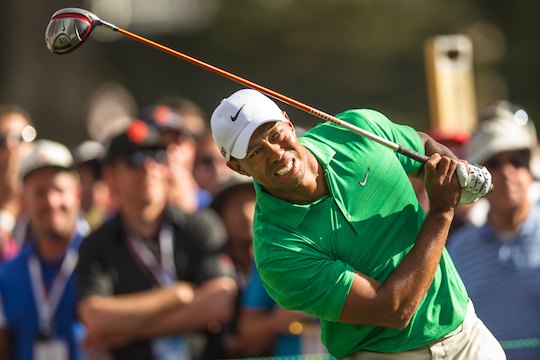 Tiger Woods plays his tee shot on the 10th hole during the third round at the 2012 U.S. Open (Copyright USGA/Jed Jacobsohn – Courtesy of www.usga.org)

Seventeen players, including Woods, are within five strokes of the lead.

What Woods has to do is stay patient.

“It’s not like where you have to go out there and shoot 62 and 63,” said the fourteen time major winner.

“This is a US Open. You just need to hang around. First you need to get off to a good start. Get through the first six. Because anything can happen at the last three holes.”

Alistair Presnell fired a third round 5-over-par 75 to slip back into a tie for 47th position at 9-over-par after opening well at these championships with rounds of 70-74.

Rod Pampling and Jason day round out the Australians well back in the field at 11-over and 12-over respectively.

The 2012 US Open seems destined for a Monday playoff, like the ones that capped the 1955 and ’66 Opens at Olympic. It sets the stage for a fantastic finish in a championship which remains wide open.

Lee Westwood and Ernie Ells are lurking dangerously and certainly should not be discounted.

Westwood has six top-three finishes in his last 10 starts in majors. Two of those came in the US Open — in 2008 he finished a stroke out of the playoff between Woods and Rocco Mediate, and last year, when he finished 10 shots behind Rory McIlroy.

Els, who won this championship in 1994 at Oakmont Country Club and in 1997 at Congressional Country Club, wasn’t thinking about winning after the first five holes, three of which he bogeyed, yet his fortunes changed as his round evolved.

The Big Easy finished with three birdies and an eagle in his last 12 holes to shoot 68. The eagle came on the 17th hole, when he chipped in from far below the hole right of the green.

“I’m in a much better mood now than I was on the sixth tee,” Els said.

“To come back and play the last 12 holes in 5 under is quite amazing, and obviously the shot on 17 is what dreams are made of, a shot like that in a US Open.”