Furyk on the fence about Tiger’s Ryder Cup chances

Jim Furyk got a genuine kick out of watching Tiger Woods play well and contend at the British Open.

And yet as Woods prepares to tee it up at the Bridgestone Invitational this week, the US Ryder Cup captain admitted he would still treat the former world No. 1 just the same as everyone else when it came to Ryder Cup selection and, like the others, Tiger would have to earn his ‘stripes’ if he is to make the team as a player. 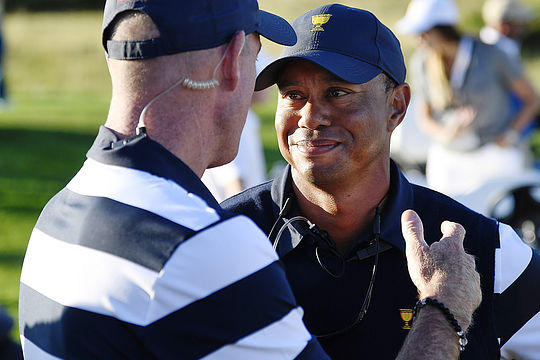 Of course Woods has already been selected as a vice captain of the team that will head to France next month to tackle the Europeans at Golf De National, just outside of Paris.

“I’m going to handle him the way I do everyone else,” said Furyk as he headed off to the Canadian Open, won by his No 1 player Dustin Johnson.

“I’ll ask my top eight guys. The way he’s playing, he might be one of them.”

“I’ll ask the vice captains, collectively, and I think we’ll do the best we can to round out the team.”

“We want the guys playing the best.”

It doesn’t take Einstein to work out that Woods is closing in on just the form Furyk would want him to be in when the Cup is played.

He has played half the events of most of the serious competitors for those final spots.

Going into this week’s event, the $10 million Bridgestone Invitational at Firestone, Woods had surged to 20th in the Ryder Cup standings with just two events left before the top eight qualify for the Sept. 28-30 contest.

One of those two events is a major championship [the US PGA] and Woods has already admitted he was desperate to play in the other [the Bridgestone] because of his outstanding record there.

And there are a lot of other players Furyk was keen to keep an eye on as well.

At last week’s Open players such as Kevin Kisner, Matt Kuchar, Tony Finau, Xander Schauffele, Kevin Chappell and Zach Johnson all had opportunities to put themselves in the Ryder Cup ‘mix’.

“We had a lot of guys in pretty good form,” said Furyk.

“Flip over to Tiger, you look at him because he’s Tiger, and he’s earned a lot of attention.

“It’s fun to watch. But we’ll handle him like everyone else.”