It was a long time coming, but Jim Furyk has claimed his 17th PGA Tour win with a 12-foot birdie putt on the second hole of a sudden-death playoff at the RBC Heritage Classic.

Furyk beat Kevin Kisner with a birdie putt on the second playoff hole on Sunday at Harbour Town Golf Links at Hilton Head Island. Furyk celebrated his win with fist pumps resembling the ones he made almost five years ago to win the FedEx Cup and its $10 million bounty. 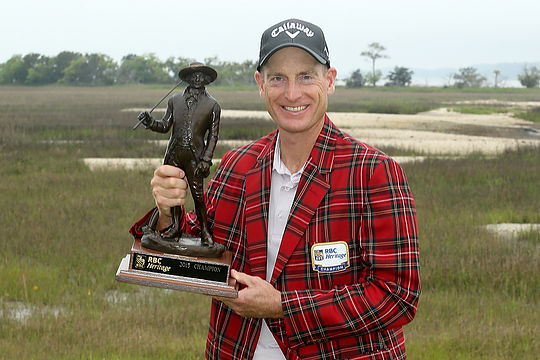 Furyk shot a final round 63 and Kisner a 64, leaving them both at 18-under. Third-round leader Troy Merritt was at 16-under after a 69. Defending champion Matt Kuchar (68) was at 14-under, and Masters winner Jordan Spieth (70) was eight shots back.

Furyk, 44, has remained one of the PGA Tour’s best players despite not winning in nearly five years. Since capturing the 2010 Tour Championship, he’s finished second seven times, lost nine 54-hole leads and yet has made close to $15 million.

“I was getting to the point where losing hurts a lot more than winning feels good,” Furyk admitted Sunday night.

“And I was starting to believe that. And I didn’t want to, but you have the lead and see someone beat you a bunch of times in a row, and I won’t say it was a negative attitude.”

I was starting to feel like this game is beating me up, and the losing hurts a lot more than winning feels good. I think I just forget how good winning feels.”

Sunday’s win was Furyk’s first in 100 starts and his 17th on the PGA Tour, putting him at No. 48 on the all-time wins list, joining Bobby Cruickshank, Harold McSpaden and Curtis Strange. It’s his second win at the RBC Heritage (he won in 2010, also in a playoff).

Spieth closed an impressive five-tournament run. He won the Valspar Championship a month ago and followed that with runner-up finishes at the Texas and Houston Opens before matching Tigers Woods’ record of 18-under at Augusta National.

Spieth has carded 19 of his past 20 rounds under par. He’ll return to golf in two weeks at the World Golf Championship Match Play event.

Cameron Smith was playing on a sponsor’s invite and was the best of the Aussies finishing in a tie for 15th position at 9-under. Smith has recently focussed on the Asian Tour with a number of top-10 finishes, yet Sunday’s result will see the former Australian Amateur Champion cashed up in the States and eyeing off a possible move on to the Web.Com Tour.

Stephen Bowditch was the next best Aussie in a tie for 44th position at 4-under, followed by Robert Allenby at 2-under and in a share for 55th position.

Aaron Baddeley was the last of the Aussies to make the weekend finishing in a tie for 66th position.