Futures to be decided at Final Stage Q-School

The final Stage of Qualifying School for the PGA Tour of Australasia will be contested this week at the Peninsula Country Golf Club.

53 players who survived first stage qualifying will be joined by those already exempt into the final stage on the North Course at the Peninsula Country Golf Club when play gets underway today. 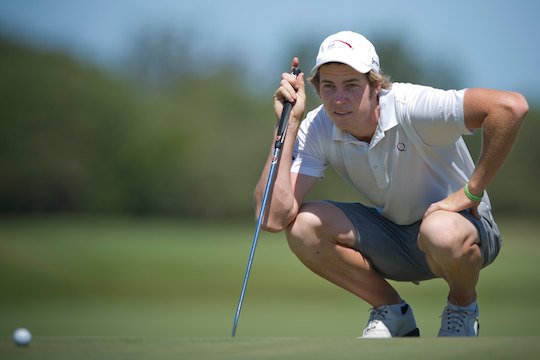 In total eighty-two players will contest for 50 playing cards with the aim of achieving status of some category.

The winner of Qualifying School receives category 8 (a). This is the equivalent of winning a State Based Championship, however, only entitles playing rights for the 2014 season rather than the following two seasons.

Players who finish outside the top-50, who do not already have a category, will not have status on the PGA Tour of Australasia in 2014.

It will be a mixture of youth and experience battling for playing privileges during Second Stage.

Brady Watt, following a successful amateur career that included a stint as the number one amateur in the world, has turned professional. Having already competed on Tour as an amateur, highlighted by his runner-up finish at the WA Open in 2012, Watt still needs to attend Qualifying School to ensure he has status for 2014.

Cameron Smith turned professional mid-way through the year and competed in four tournaments on Tour courtesy of sponsor invites. Making two cuts with a best finish a T13 at the Queensland Open failed to earn him enough money on the Order of Merit for status on Tour in 2014 forcing him to return to Qualifying School.

Matthew Guyatt, the 2011 NSW PGA Champion, finished 68th on the 2013 Order of Merit which gives him status on Tour for 2014. Currently in category 12, Guyatt is aiming to improve with a top-20 finish this week.

Last week Guyatt secured a card for the Japan Golf Tour so the Queenslander will be full of confidence heading into this week’s event.

Kim Felton played twelve events in 2013, making five cuts with a T4 at the WA Open the highlight of his season. This wasn’t enough to see him retain his card so he is at Qualifying School to ensure his status for 2014.

Wayne Perske will be aiming to improve his status with the former Japan Tour player exhibiting some excellent recent form, as will Neven Basic also a former player on the Japan Tour.