G Mac has Woods on top of his Xmas list

McDowell captured a fourth 2010 success – and his second of the year in California, when he humbled tournament host Woods to capture last month’s Chevron Challenge at Thousand Oaks in northern Los Angeles. 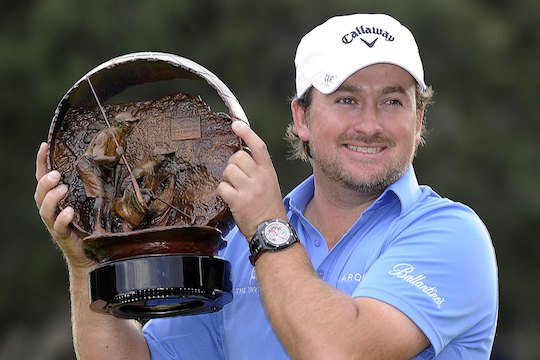 G Mac has Woods on top of his Xmas list

McDowell came from well back in the pack to totally spoil any hope Woods had of ending his year with a first win to deny the former long-time world No. 1 in a play-off.

It was the first time ever that a crestfallen Woods had not won when leading by at least four shots going into a final round.

But of more note was the fact it was the first year since Woods turned professional in late 1996 that the beleaguered Woods had not won in a season.

It was just 12 months ago that McDowell was winging his way across the Pacific after he and Rory McIlroy had lost the World Cup of Golf to Italy’s Molinari brothers.

By chance McDowell elected to get off at LA instead of flying on to his home in Orlando, just on the off-chance of a late invite into the Chevron given that Woods’ world was starting to come crashing down around him.

McDowell got the invite and found himself deputising for the embattled American before eventually finishing runner-up to Jim Furyk.

The Ulsterman’s second place finish put him inside the top-50 in the world rankings and eventually on the path to Pebble Beach winning glory.

Winning in the shadow of the foothills where they filmed the TV series MAS*H lifted McDowell to an all-time career high of No. 7 in the world.

“There’s no doubt. 53 weeks ago or whatever it was, coming back from China, was the start of a journey which has taken me some amazing places this season,” said McDowell.

“I have to thank Chevron and the Tiger Woods Foundation for giving me the opportunity last year.

“I’m a believer in faith as people get there, just different paths all lead to the same place really.

“But I do look back at last year, and I wonder if I would be sitting here if I hadn’t got into the tournament and been second last year.

“And I don’t know the answer to that.

“All I know is I feel pretty lucky and fortunate to have been here last year, to have done it, and got myself the opportunity to achieve what I achieved this year.

McDowell better get that Christmas card off to Woods without delay if he wants to defend in 2011.

“I had a joke with Tiger on Saturday coming down the 18th, and I said that there was a few more people here this year, and I didn’t understand why,” said McDowell.

“Tiger just told me to quit moaning because he had done me a favour last year, of course.

“So, if I ever need an invite again, who knows? Maybe I won’t get one.”