Gale force winds have forced the suspension of the Australian Open Championship during the final round at The Lakes Golf Club on Sunday.

Gusts of up to 75 kilometres an hour left officials with little alternative but to stop play at 11.43am. 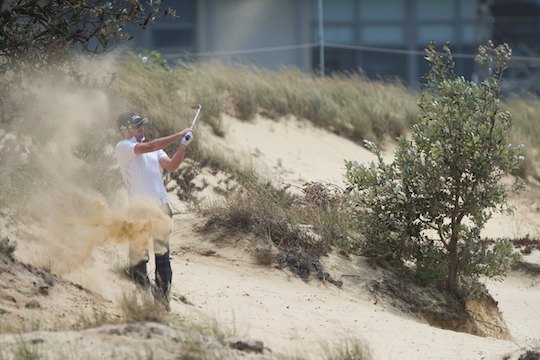 Josh Geary finds trouble on the opening hole at The Lakes before play was suspended due to gale force winds (Photo: Anthony Powter)

The group of Josh Geary and Andre Stolz bore the brunt of the conditions with Geary sitting on the first green counting seven and yet to hole out.

Tournament leader John Senden is yet to begin his final round, with Adam Scott having found the short grass on the 1st before the suspension was called.

“A good (round) score is even par,” said the 8-time major winner.

“It will be interesting to see what happens. It’s a really strong wind.”

Tournament organisers are hoping to see play commencing mid-afternoon and have indicated to play to last light so as to avoid completing the tournament on Monday.