Daniel Gale has overcome a two-shot deficit in the final round, to be crowned the 2018 Trukai Morobe Open champion.

Gale finished regulation play tied at the top of the leaderboard alongside overnight leader Damien Jordan. The pair, finishing with a 72 hole total of 22-under 262, headed to a play off with Gale holding his nerve to claim victory on the Ladbrokes Pro-Am Series. 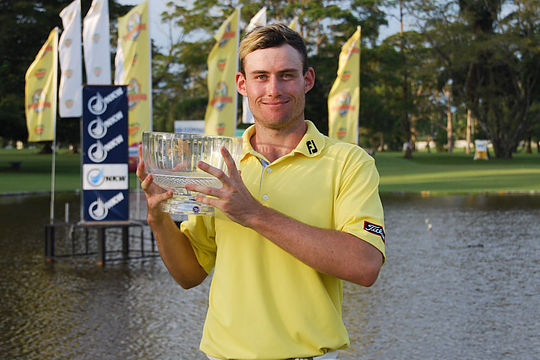 On a perfect afternoon for scoring, spectators were treated to a final round shootout between Gale and Jordan, as both players went shot for shot over the final nine holes.

Jordan birdied the 10th and 11th to open up a four shot lead but Gale hit back with birdies on the next three holes to reduce the gap back to one.

With two holes to play Jordan held a one shot lead but saw that eliminated when Gale made a birdie at the 17th and the pair went to the final hole tied.

With the pressure on, both players made their four foot birdie putts on the final hole to force a playoff.

In search of the largest win of his young career, Gale made the first move with a birdie at the opening hole of a three-hole aggregate playoff to Jordan’s par.

After both players made par on the second playoff hole, Gale stood on the 18th tee with a one shot lead.

Jordan decided to lay up on the third playoff hole, while Gale went for the par-5 in two.

Unfortunately his second found the water left of the green, opening the door for Jordan to extend the playoff.

Jordan played an almost perfect pitch to one metre while Gale took his penalty drop and pitched it to within one foot of the hole.

The pressure was all on Jordan, but his birdie putt grazed the left edge of the hole leaving Gale with his putt for the win which he made no mistake with.

“It is a great feeling winning the Morobe Open in Lae. It was awesome to win the Sydney Invitational a few weeks earlier but my win this week certainly tops that,” said Gale.

“I have never been involved in an aggregate playoff before, and when my second shot found the water on the final hole I thought I had opened the door for Damien. Unfortunately, he was unable to convert his birdie putt, giving me the opportunity to close it out, which thankfully I managed to do.”

As the leaders were battling it out, 18-year-old Cameron John enjoyed the round of his life. After making the turn in 29, John made a further five birdies on the back-9 to sign for a new unofficial course record round of 11-under 60 to finish 6th overall.

Professional golf remains in Papua New Guinea this week with the SP Brewery PNG Open being staged at the Royal Port Moresby Golf Club as part of the ISPS HANDA PGA Tour of Australasia.