Gale storms to SP Open victory for a PNG double

New South Welshman Daniel Gale has secured his first victory on the ISPS HANDA PGA Tour of Australasia, running away with the SP PNG Open title in the final round.

Starting with a three shot buffer at 17-under the card, Gale flew home with a round of 6-under 66 to finish on 23-under 265, a commanding nine shots ahead of his nearest rival. 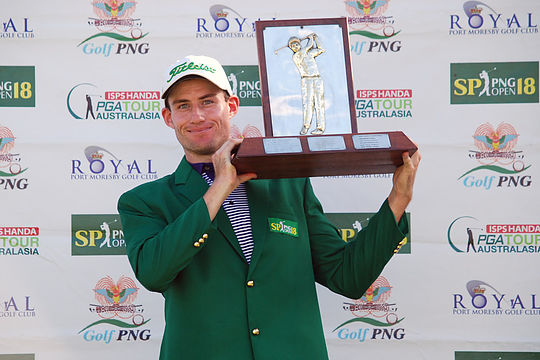 He also becomes the first player to win the Morobe Open on the Ladbrokes Pro-Am Series and SP PNG Open in successive weeks since Michael Wright in 2009.

“I felt a bit shaky to start off with, last week I felt like I was in control because I had to chase down Damien (Jordan),” said Gale.

“A three shot lead can change in one hole and I think my lead got down to one at a point on the front-9 but I went on a roll on the back-9 and had four birdies on the trot and that separated me.

“The last two holes were a lot of fun; I had a seven shot lead with two holes to go and could just enjoy the walk.”

Gale’s work on his short game with his coach, PGA Professional Paul Latham was evident in an impressive chip in for his fourth birdie in a row on the 16th.

“I’ve been doing a lot of work on those simple chip shots with my coach Paul Latham and the hard work is paying off,” added Gale.

For winning the SP PNG Open Gale now has full status on the ISPS HANDA PGA Tour of Australasia and will tee it up in marquee events on the schedule including the Emirates Australian Open, Australian PGA Championship and his next event, the Fiji International presented by Fiji Airways.

“It hasn’t fully sunk in yet, to know that I’m playing Fiji, Australian Open and Australian PGA Championship, I can’t wait,” added Gale, who is now fully exempt until the end of the 2019 season.

“I’ll be able to get my buddies in the crowd, it feels awesome. It was one of my goals this year to get a Tour win, last week was great but this being a Tour win is pretty special, I think that’s why I had a few more nerves just knowing what was on the line.”

“I’ve ticked that off the list and the hard work is all paying off. To shoot a personal best of 22-under last week and beat that with 23-under this week is just insane; it’s the kind of stuff you dream about.”

Next up for the newly minted SP PNG Open champion is a trip to the US to attempt to qualify for the US Open and pre-qualify for a handful of Web.com Tour events.

He said the security of status on the ISPS HANDA PGA Tour of Australasia will take off a little pressure as he aims to compete at the highest level.

“America’s my main focus, so I’m going to try and get in to the U.S. Open and if I get in there and play well that obviously opens more doors,” added Gale.

“I’ll focus on a couple of Web.com Tour events and potentially the Web.com Q-School as well.”

Finishing in a tie for second place was Tim Stewart and Braden Becker at 14-under the card, Dale Brandt-Richards, Chris Wood and Aaron Pike round out the top-5 finishing at 11-under the card.

For his win, Gale picks up $21,750 as well as Official World Golf Ranking Points and is fully exempt on to the ISPS HANDA PGA Tour of Australasia for the remainder of this season plus a further season.