The 15 years and under Division was dominated by Charles Pilon from the Hills Golf Club after an opening round of 81, Pilon rebounded with rounds of 73,70 and 75 to finish at 11-over for a seven shot victory over Josh Armstrong from Gold Creek. 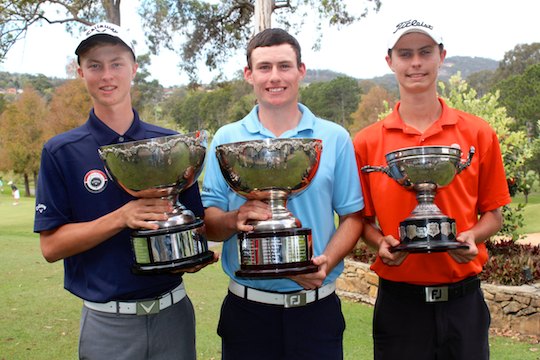 The 16-17 years division was a closer affair with only a shot separating champion Joshua Taylor from Yarra Yarra and runner-up Douglas Klein from Redcliffe.

Taylor held a one shot lead heading into Friday’s final round and was able to hang onto the lead despite a spirited challenge from Klein, Taylor finishing with rounds of 72-75-76-74 to be at 9-over.

Daniel Gale from Castle Hill in the 18-20 years division was able to extend away from the field with a four stroke winning margin after scores of 70-72-75-75 to finish at 4-over.

His closest competitors Tim Hyland from Bonville and Shae Wools-Cobb from Horton Park returned final round scores of 78 and 76 respectively.

The Gary Player Classic is a feature on the Australian Junior Order of Merit, now in its 43rd year.

The tournament has led to international recognition for many of the amateur competitors under age 21, with past champions including Greg Norman, Peter Senior, Ian Baker-Finch, Adam Scott and Jason Day.