Garcia, with German girlfriend on the bag, went into the last day leading by four shots and was never headed in storming to a four shot success in the steamy sauna-like conditions on the Amata Springs Country Club course. 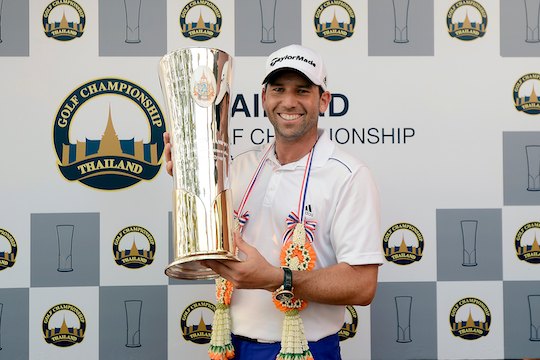 It is Garcia’s first taste of success since lifting the PGA Tour’s Wyndham Championship trophy in the week after Rory McIlroy won 2012 PGA Championship.

Garcia, who was runner-up in last week’s Nedbank Challenge in South Africa, posted a final round 68 to win by four shots with a 22-under par tally for a 25th professional victory and a year after he also won the last event on the 2012 Asian Tour with success in the Johor Open in Malaysia.

And Garcia dedicated his victory to him mother who has just been released from hospital after minor surgery.

“I am very elated and after being fortunate to have now played the event for three times now, I have been getting better with every year,” said Garcia.

“It’s been a great week right from the beginning but then Henrik was pushing me hard all the way but I am just really happy to come through and win.”

“I want to dedicate this win to my mum who just had a little minor surgery early last week but she’s recovering nicely.”

“Also I have to say thanks to my girlfriend for keeping tough with me all week. This is the first she has caddied for me but I think now she can live with a win, and she is happy with that, but she was calmer than me and cracking jokes all the time and trying to keep me loose so she did a great job.”

An exhausted Sweden’s Henrik Stenson wrapped-up a remarkable second half of 2013 with second place in signing for a 68 and an 18-under par total.

“I’ve had a great year but coming here really on the fumes left in the tank, not too much going for me to perform in that sense,” he said.

“But I played really nicely yesterday and I was hanging in there today and I was just coming up a couple short.”

“I needed something really, really good to happen on eight and nine but I didn’t make those two birdie putts and Sergio was hanging in there, made one or two good saves and then he made three birdies in a row, and pulled away.”

“So congratulations to Sergio on a great week. He played really well.”

Frenchman Alexander Levy holed a 20-foot birdie putt on 18 in a round of 69 to be placed third on 14-under par.

England’s Justin Rose and the reigning US Open winner shot a disappointing last day 72 to share fourth place on 13-under par tally with three others including fellow Major winner Charl Schwartzel (67).

Thailand’s Kiradeck Aphibarnrat finished the year as Asian Tour No. 1 with earnings of $US 1.127m helped by his stunning Maybank Malaysian Open success.