Spanish golfers have won now four of the past eight events at the Emirates Club. 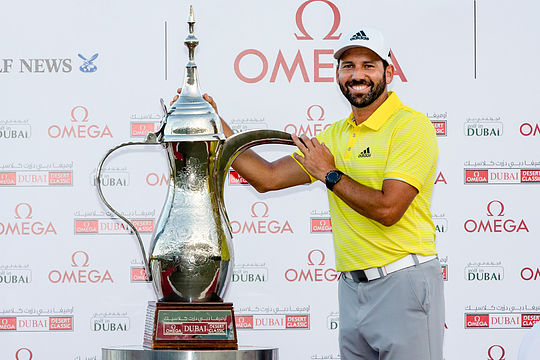 Garcia set the tone with an opening 65 at Emirates Golf Club on Thursday and never looked back, finishing with a bogey-free 69 to get to 19 under to beat Open champion Henrik Stenson by three shots.

Garcia entered the final round with a three-shot lead and while back-to-back birdies from Stenson on the 13th and 14th applied some pressure, the 37-year-old produced a stunning tee-shot on the 15th and a brilliant up-and-down on the next to ease to victory.

Englishman Tyrrell Hatton and Dane Lasse Jensen were then at 14 under, two shots clear of Matthew Fitzpatrick and Peter Uihlein.

Garcia celebrated his 250th European Tour appearance in some style, claiming his first win since the 2014 Commercial Bank Qatar Masters and potentially moving back into the top ten of the Official World Golf Ranking.

“I’m very happy to play the way I played, ” he said. “The way I handled some of the key moments and to beat Henrik, we all now how great a player he is.”

“The eighth was very, very big because it was the worst drive I hit all week, unfortunately, but it was a massive save and then I birdied nine which was great.”

“The 16th was important but I think 15 was more important. He was coming after two birdies and I hit a really, really good shot. To be able to hit it to a couple of feet and get four clear was massive.”

“Even on the 18th with a four-shot lead I knew that I needed to hit a good third shot because you can mess it up a little bit there if you’re not careful.”

“Henrik is always there so you’ve got to stay calm and collected with him.”

“It’s a great start to the year so we’re going to try to keep going the same way.”