Garcia secures third win of the season in Spain

Sergio Garcia won the Andalucia Valderrama Masters on the European Tour after shooting 4-under 67 in the final round on Sunday.

It was the Spaniard’s sixth win on home soil and his second title at Real Club Valderrama. He won the Andalucia Masters at this venue in 2011. García has 32 professional titles to his credit including 10 PGA Tour and 14 European Tour wins. 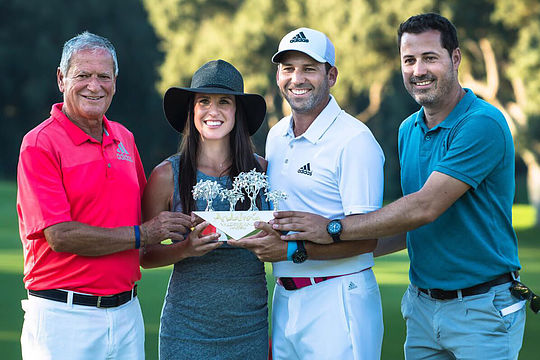 The win was García’s first since his Masters title in March, and it gives himself a chance to become the first Spaniard to win the European Tour’s Order of Merit since Seve Ballesteros.

The 37-year-old fended off a stellar challenge by Dutchman Joost Luiten, who shot an impressive 66 around Valderrama to finish on 11-under. That left García needing a par on the 18th to secure the victory. Despite nailing a number of critical putts over the pack nine, García nervelessly converted the putt when it counted.

“It was amazing,” said García.

“I stayed patient the whole time, made sure the bad moments didn’t affect me too much and made a couple of really key putts coming in. I want to dedicate this one to my wife Angela and our little baby coming next year in March – this one is for them.”

In 13 tournament appearances as a professional at Valderrama, García has only once been outside the top-10. Eight times he has posted a top-five finish in what is clearly an affiliation that he has with his homeland layout.

The win is García’s third of the season after he claimed his maiden Major Championship at the Masters Tournament to go with the Dubai Desert Classic, and closes the gap on Tommy Fleetwood at the top of the Race to Dubai Rankings.

It also brings to an end a stellar week for García who was awarded Honourary Life Membership of the European Tour in recognition of his triumph at Augusta National in April.

He became the 53nd player to be added to the exclusive list and is just the third Spaniard to receive the accolade, after Seve Ballesteros (1983) and José María Olazábal (1994).

England’s Daniel Brooks finish in third position at 7-under, two shots clear of Welshman Jamie Donaldson and three ahead of Australia’s Wade Ormsby as all three men moved inside the top 101 in the Rankings to secure their playing privileges for next season.

Jason Scrivener finished at 2-over to secure 27th position to round out the Aussies who made the weekend with Richard Green missing the 4-over-par cut.