Sergio Garcia and Kurt Kitayama shot matching five-under-par 66s in round one to share the clubhouse lead at the US$1 million SMBC Singapore Open as play was suspended just after 5pm local time due to lightning strikes.

Garcia took a while to warm up at the Asian Tour season-opener. The reigning Masters Tournament champion, who teed off at the 10th hole, started with a streak of pars that was ended by a bogey on the 15th. 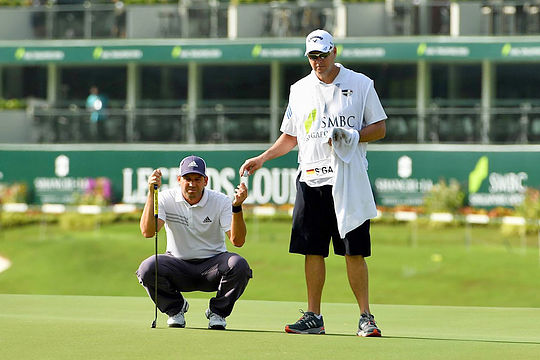 However, a birdie-eagle finish on his opening nine helped him find his rhythm and he went on to sink another three birdies before he ended his round.

“I was one-over-par after seven holes, even though I didn’t feel like I’m playing badly. But, I hit two good six-irons in a row on 17 and 18th, where I made an eagle. That settled me a bit and I was able to play solidly over the back nine,” said Garcia.

“I’ll keep trusting myself. I’m really comfortable with the equipment that I have. The driver feels great and the ball is amazing. It’s a matter of believing and being positive.”

After finishing tied-third at the Asian Tour Qualifying School last week, Kitayama is physically drained but in high spirits after a great opening round.

It was his first time playing on the award-winning Serapong course and he did exceptionally well, evident from his near-flawless performance. The 25-year-old American scored six birdies against one bogey.

Tirawat Kaewsiribandit of Thailand was on his way to share, or even seize the lead before play was suspended at 5.03pm due to lightning risk. The 28-year-old is five-under-par through 16 holes.

Tirawat birdied the fourth and fired three consecutive birdies from the 16th to 18th to make the turn at 31. The siren sounded after he teed off from the 8th tee box.

Four players who finish inside the top-12 and ties, who are not already exempt, will earn places in the field at Carnoustie from July 19 to 22, 2018.