Masters champion Sergio Garcia put on a superb display of golf as he carded a 3-under 68 to romp to a dominant five-shot victory at the US$1 million SMBC Singapore Open on Sunday.

The 2017 Masters Tournament champion built his one-shot lead at the start of round four into a five-shot advantage after nine holes on Sentosa Golf Club’s Serapong course.

“It’s always great to start with a win, to do it here at this golf course against a good field in Asia on conditions that weren’t easy. Hopefully I can ride on this momentum.”

“I’m extremely happy with how the week went. It was a tough day and a tough week, with the stopping and going. Fortunately, the weather held on, we were able to play and the people were able to enjoy it. Still, it was hard to play 27 holes under this heat and I can’t wait to get a cold shower.” 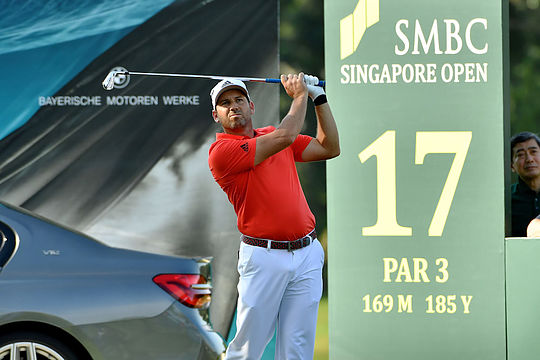 Garcia’s day got off to a great start as he birdied the first hole. He went on to score two more in quick succession before the turn, on holes seven and eight. The Spaniard switched to cruise control for the remainder of the round, carding nine consecutive pars to close with a total of 14-under-par 270.

A final-round 71 earned Satoshi Kodaira of Japan a share of second place. The six-time Japan Golf Tour winner played a rollercoaster round, highlighted by the fact that he only had eight pars out of the 18 holes.

South Africa’s Shaun Norris had a round of two halves. He dropped two shots in his front nine, but he rallied and made three birdies on the back nine to card a 70 as well as to grab a share of second place.

Jazz Janewattananond gave himself an outside chance of winning the tournament after carding 68 and 66 in rounds two and three respectively. The 22-year-old could not sustain his mid-tournament form and closed with a 71. He finished tied-fourth and earned a spot at this year’s Open Championship.

The SMBC Singapore Open is part of The Open Qualifying Series. Four players who finish inside the top-12 and ties, who are not already exempt, earned places in the field at Carnoustie from July 19 to 22, 2018.

Compatriot Danthai Boonma also finished tied-fourth and he will join Jazz in Carnoustie after carding a 73. The 21-year-old sizzled in round three with a 65 to lead the tournament at the end of Saturday. However, he could not bring his momentum to round four.

Sean Crocker of the United States and Cameron Davis of Australia carded 69 and 70 respectively to finish in tied-fifth. With Davis already exempt, Crocker will take up the third Open Championship spot.

Herbert got the nod because of his higher position on the Official World Golf Ranking. 2017 Asian Tour Order of Merit champion Green is already exempt.