Sergio Garcia lived up to his star billing by winning the inaugural Ho Tram Open at the spectacular Bluffs layout on Vietnam’s east coast on the second hole of a four-man playoff.

The world number 12’s par was good enough to edge out India’s Himmat Rai, who almost extended the playoff to a third hole with an unlikely recovery from dense bush to the left of the fairway. 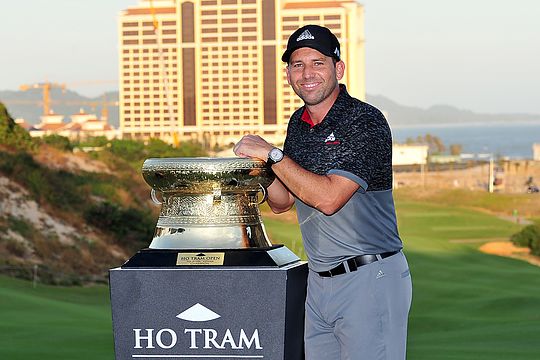 Earlier, Thailand’s Thaworn Wiratchant and Lin Wen-Tang were eliminated from the four-man playoff when Garcia and Rai birdied the 1st playoff hole, Garcia draining a putt from long range.

For quite some time as the final round drew to a conclusion, it appeared to be a tournament that nobody seemed like they wanted to win.

Garcia had lead comfortably after a six-under front nine but wobbled home in the breezy conditions, punctuated by an ugly double bogey from the middle of the fairway at the 17th to lose the lead.

“It was a strange day. It felt like I was so much under control, the way I played the front nine. Then I hit a bad tee shot on 10 but I still managed to get it back together and had some chances which I didn’t make. Then I hit a poor shot on 17,” said Garcia.

Almost on cue, both Rai and Taipei’s Lin Wen-Tang three-putted to drop back into a share of the lead and an eventual playoff at 14-under 270.

Victory in Vietnam was Garcia’s 28th world-wide win and his first since lifting the Qatar Open title in early 2014.

“I guess they gave me a hat in my hand, I gave it away and they gave me another chance. It was just luck for me. I had 30 to 35 feet (on the first play-off hole), and even if you hit a great putt, you need to get lucky,” Garcia continued.

Denmark’s Thomas Bjorn can count himself unlucky not to have joined the playoff after marring a spectacular round of seven-under 64 with a bogey on the final hole to finish in outright 5th place.

West Australian Terry Pilkadaras closed the final round at 9-under to finish inside the top ten in tied 9th place. Geoff Ogilvy was two strokes futher back in a tie for 14th while Sam Brazel, Adam Groom, Andrew Dodt, Kalem Richardson and Matthew Giles filled minor placings.

Garcia will now heads to Thailand for the next event on the Asian Tour, the Thailand Golf Championship at Amata Springs, which features a strong field including Bubba Watson, Martin Kaymer, Lee Westwood, Thongchai Jaidee and Victor Dubuisson.