Jordan Garner fired a 15-under par total to win the men’s title at the Federal Golf Club on Sunday staving off a determined Blake Windred in the process.

Garner fired rounds of 70-68-65-70 for a stroke win over Windred, clinching the title with par on the last after Windred had drained a massive putt to place pressure on Garner, who needed to get up-and down from the green side bunker to avoid a play-off. 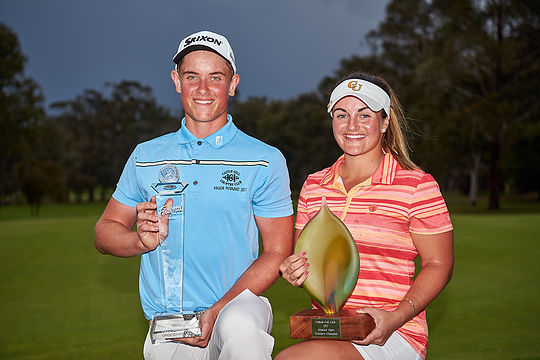 Facing a difficult four metre downhill putt, Garner rolled the putt beautifully and let off a massive roar after seeing the ball find the bottom of the cup.

“Blake [Windered] had just drained his putt and was just not giving up. I needed make it so I was able to hold my nerve and get the ball rolling towards the hole. Thankfully if made its way to the cup.”

Garner’s third round 65 was the equal low round for the 36 hole day and gave him a slight buffer heading into the afternoon’s session. The margin between the leaders was never more than two shots as Windred and Garner battled the majestic Federal layout.

“It was tough going all day,” said Garner.

“It was never easy and I needed to keep fighting as Blake was constantly applying the pressure. It’s a pretty cool win to have and it gives me plenty of confidence heading into this week’s NSW Open.”

Hyun Barron, Kyle Michel and local Josh Armstrong shared third place at 12-under, with Jediah Morgan taking out the Junior Federal Amateur title at 11-under.

Tahlia Ravnjak rallied from behind to secure the Women’s title in a display of gritty and determined golf.

The 24-year-old began the day six shots behind the overnight leaders and carded rounds of 67 and 68 on the 36-hole final day to claim the title by two strokes from Victoria’s Stephanie Bunque. Grace Kim finished in 3rd position, with Karis Davidson and Sophie Yip rounding out the top-5.

Ravnjak, who has only recently to Australia after playing in the US Collegiate system at Campbell University in North Carolina, fired rounds of 74-76-67-68, describing her final 36 holes as some of the best golf she’s ever played.

“I got off to a slow start in this tournament, but stayed in there,” said Ravnjak, 24, who is originally from the Wollongong area in NSW.

“Today, it just clicked and my shot making was spot on. I was able to get some early birdies and built on that coming in. It’s great to get this win as it’s probably my last tournament as an amateur as I plan to go professional.”

Ravnjak attributes the discipline and structure of the US Collegiate system as being critical to her development and had nothing but positive comments about other Australians giving the system a go.

“I’m fitter, better prepared and more committed as a result of attending college,” she says. “That helped me a lot out there today in fighting to get this result.”