Garrett back in the winner’s circle at Yamba

Getting engaged, a new fitness regime and a move north to Brisbane last year seem to have done wonders for Nikki Garrett, who shot a superb 5-under par 68 to claim the BWAC Regional and Community Services ALPG Pro-am at Yamba Golf and Country Club on Friday. 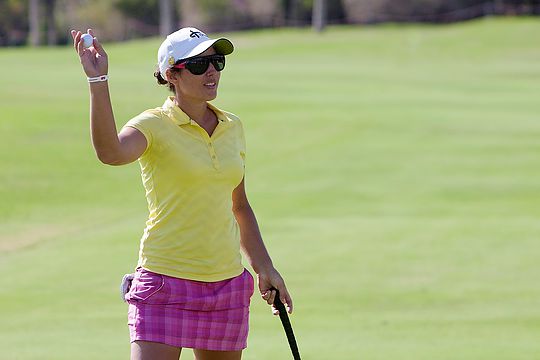 The confidence-boosting win has been a long time coming for Garrett whose last win of any kind came at the 2006 Macarthur YAP Golf Classic, the same year she won twice on the Ladies European Tour in her rookie season.

“Lots of things have fallen into place since I moved to Brisbane last year. (Physiotherapist Sean Fyfe) picked up that I was weak in some areas, especially through the hips.”

“The hips have always been an issue in my swing and once I started seeing results and feeling stronger I started to feel more comfortable with the driver.”

“I played much better last year in Europe than I have done in previous years, from the middle of the year I felt that I wasn’t far away from another good week.”

“At my last event in China in 2014, I was in second place going into the final round. It was the first time I had been in contention for a while and I played well even though the putter let me down. I knew then I was making good progress.”

Garrett and her ALPG colleagues moved on from Yamba to her new hometown of Brisbane to contest the $30,000 McLeod ALPG Pro-am at the McLeod Country Golf Club from Jan 12-13.