Daniel Gaunt was again singing the praise of the person who has been instrumental in a dramatic change of fortunes for the 36-year old Aussie and that’s supercaddy John ‘Ronnie’ Roberts.

‘Ronnie’ is again on the bag with the duo storming their way to a share of the lead on the opening day of the M2M Russian Open in suburban Moscow. 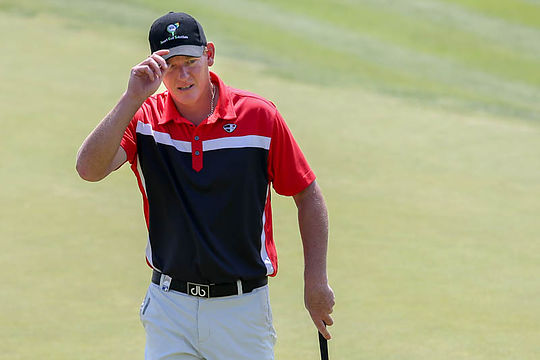 The 36-year old Gaunt, who with ‘Ronnie’ by his side secured a European best of second in the recent Made in Denmark event just weeks after a then career high of T9 in the BMW International Open, birdied his closing hole after some earlier dramatics to end the round tied on six under par with Scotland’s Scott Jamieson.

Gaunt got off to a flying start with four birdies and a sensational chip-in eagle at the 12th before giving the two shots back with a double bogey at the 15th.

But with ‘Ronnie’ by his side and continuing to call the shots, Gaunt bounced back in superb manner with birdies at the 16th and final holes in a round of six under par 65 in mixed weather on the Skolkovo Golf Club course.

“So it’s nice to post a 65 and be sharing the lead with the clear highlight that great chip-in for eagle at 12 after bombing a drive down the fairway and then cutting a 3-wood that I missed just right but I then committed to the chip shot and the shot just ran out perfectly, straight into the middle of the hole.”

“But once again Ronnie’s been great in keeping me going and I’m now looking forward very much to building on this round.”

Gaunt missed the cut in last week’s Czech Masters but he’s put that behind him very quickly as evident in a round that also included six birdies with his only blemish being a double bogey at 15.

“I got told I was playing great golf and I just came out here believing that now and if I can keep that up, one shot at a time, the results will take care of themselves.”