England’s Daniel Gavins charged from a seven-shot deficit to claim his first European Tour title at the World Invitational on Sunday in Northern Ireland, and Thailand’s Pajaree Anannarukarn recovered from a triple bogey to win the women’s tournament after a playoff.

Gavins carded a bogey-free 5-under 65 in the final round to win by a stroke over fellow countryman David Horsey, with a four players sharing 3rd position including New Zealand’s Daniel Hillier. 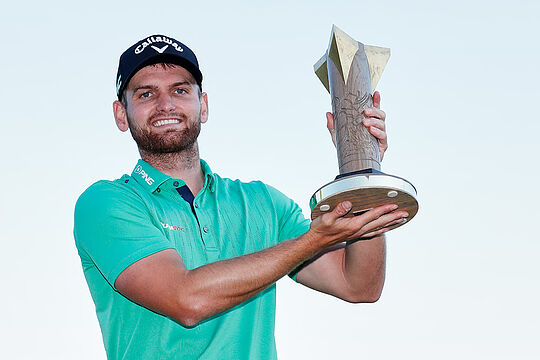 “I was a little nervous before but I just tried to shoot as low as I could today,” said Gavins. “At seven behind I didn’t really think I was within a chance of winning so there was maybe a bit less pressure there.”

“I’ve been playing well but I was going to have the week off because I knew there’s a lot of Challenge Tour events coming up so I thought a week off here maybe and then play the rest of the Challenge Tour.”

“I just can’t believe it, it’ll take a while to sink in, an amazing day. It’s amazing that every week on the European Tour is just a place you want to be. I’m just fortunate to be on it and just playing golf.”

Gavins, who was ranked 995th in the world at the end of 2020, had never previously recorded a single top-10 finish on the European Tour.

Blake Windred was the best of the Australians finishing in a share of 22nd position at 6-under, with Maverick Antcliff a shot behind in a share of 26th position. Dimi Papadatos, Austin Bautista, Bryden McPherson, Jake Mcleod, Scott Hend and Deyen Lawson missed the weekend.

In the women’s event, Anannarukarn overcame a triple bogey on the sixth hole to beat American Emma Talley on the second hole of a playoff.

Both players made par on the first extra hole and another on the second was enough for Anannarukarn to secure her first LPGA Tour title after Talley missed the green with her approach to open the way for her opponent’s victory.

“I’m honestly just speechless. I really wanted to thank everyone along the way, those who believed in me from the very beginning. I wouldn’t be and wouldn’t have come this far without them. It was really nice to have my friends here. It is always great to see them, especially such a special memory,” said Anannarukarn.

Sarah Kemp added another top-10 to her season finishing in a share of 8th place to lead the Australians on 11-under. Su Oh was another shot back in equal 11th.

LET star Steph Kyriacou rounded out the Aussie attack in 34th while Whitney Hillier and Sarah Jane Smith sat out the weekend.