It was Gay’s fifth tour victory and first since the 2013 American Express and he now becomes the oldest PGA Tour winner since Davis Love III at the 2015 Wyndham Championship.

The 48-year-old gains entry into next year’s Sentry Tournament of Champions, the Players Championship and Masters Tournament, in addition to earning 500 FedExCup points.

After five birdies on the front nine, Clark was two strokes in front of Ollie Schniederjans and three ahead of a group that included Gay.

But five birdies by Gay over the closing nine pushed him into the playoff after Clark made bogey on the 16th with the two finishing at 15-under-par for the tournament proper. 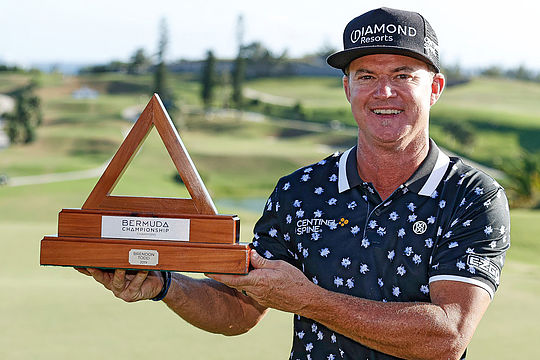 “Crazy game,” said Gay following his win. “You never know what’s going to happen but I’ve always known I have the game to compete.”

Doc Redman entered the fourth round in the lead and shot 69 on a low-scoring Sunday, which left him in a tie for fourth place alongside Denny McCarthy, Stewart Cink and Australian Matt Jones at 12-under for the tournament.

Cameron Percy was the next best Australian finishing in a share of 26th position – a final round 65 moving Percy twenty-two places up the leaderboard. John Senden shared 49th position at 1-under to be the last of the Aussies to make the weekend.

This week the Houston Open will return to Memorial Park for the 73rd time with 2000 of the daily tickets available to the public for the first time on US soil since the world went into lockdown in March.

Brooks Koepka, Dustin Johnson, previous World No. 1 Jason Day and multiple PGA Tour winner Rickie Fowler have all confirmed their attendance in preparation for the Masters Tournament the following week.