Brian Gay won his fourth PGA Tour title at the Humana Challenge on Sunday, beating Charles Howell III with a 5-foot birdie putt on the second hole of a playoff.

Gay, 41, closed with a 9-under 63 on PGA West’s Arnold Palmer Private Course to match Howell and Swedish rookie David Lingmerth at 25-under-par. 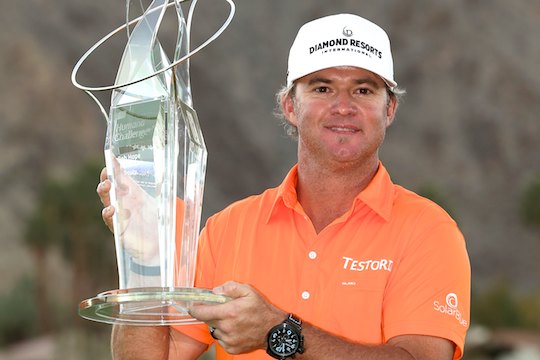 Not renowned as a long hitter, Gay attributed his win to accuracy and touch around the greens.

“My whole game’s been about accuracy and short game,” said Gay.

“I’ve always been a short hitter on the tour and I felt like as I was getting older I’m only going to get shorter and shorter. …. but my thoughts were ‘Just be aggressive and shoot as low as you can’ and it paid off.”

He picked up his first win on tour at the Mayakoba Golf Classic at Riviera Maya-Cancun in 2008 after 298 PGA Tour starts, with his second win coming at the Verizon Heritage in 2009.

Sunday’s win was his first in three years after winning the St. Jude Classic in 2009.

Howell last won on the PGA Tour in 2007, yet 2013 is looking well for the American after a runner-up finish on the weekend which can off the back of a third-place in Hawaii in the Sony Open.

Russell Henley, the Sony Open winner last week in his first start as a PGA Tour member, tied for 56th at 15 under

The leading Australian was Matt Jones who finished in a tie for 23rd at 19-under with Geoff Ogilvy and Aaron Baddley in a tie for 27th position at 18-under.