Challenging is one word you could use to described the opening round of the Walker Cup being played at Royal Aberdeen Golf Club in Scotland.

Controversy is another after England’s Jack Senior was found to have played with a professional golfer as his caddy, which is not allowed. 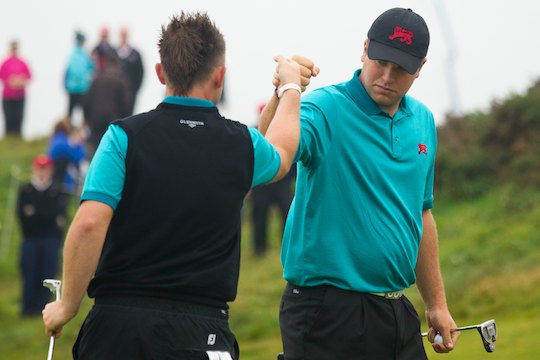 Senior teamed up with fellow Englishman Andy Sullivan to beat American champion Kelly Kraft and Russell Henley, but it then emerged that his caddie, his brother Joe, is a professional golfer. Debate circled as to the right decision given the nature of the infringement.

Had the game not being allowed to stand, that could have turned a 3-1 lunchtime lead into 2-2 if the game had been awarded to the visitors, but it was decided that because it came to light after the completion of the match the result would stand.

The first day of play eventually saw the Great Britain & Ireland team leading over USA, 7-5, but it was not without some controversy.

“We are quite satisfied there was no advantage gained,” said  Royal and Ancient Club chief executive Peter Dawson.

“The US captain [Jim Holtgrieve] was the first to say that. It’s been in the rules of the competition for a long, long time, but Jack was unaware.”

The home side held a 3-1 lead after the morning foursome matches, thanks to three consecutive victories by their top order where Tom Lewis and Michael Stewart defeated Peter Uihlein, 2&1, Jack Senior and Andy Sullivan got their match against Russell Henley and Kelly Kraft, 2&1, with Paul Cutler and Alan Dunbar winning the third match, 5&4.

It was the best GB&I first-session effort since 2003 when it defeated the USA at Ganton Golf Club by one point.

American captain Jim Holtgrieve made no protest regarding the Senior affair and was more concerned that his early starters in the singles made inroads into the deficit.

Peter Uihlein duly obliged with a spirited victory over Tom Lewis, who struggled throughout.

The afternoon singles not only resulted in Jack Senior finding another caddie, but in a 4-4 finish. Conditions veered from perfect to atrocious as afternoon storms swept across the spectacular Aberdeen links.

After Peter Uihlein accounted for Tom Lewis, 2011 US Junior Champion Jordan Spieth won 3&2, over Jack Senior. Harris English claimed a 2&1 win over Andy Sullivan, with world number 1, Patrick Cantlay, playing number 8 for the Americans remaining composed for Michael Stewart, 2&1, to secure the four USA matches and to keep the Americans in the mix.

The rationale for the morning Senior and Sullivan foursome match being awarded despite the infringement was confusing.

Senior had escape the penalty because the error was not spotted until the match had been finished and in matchplay that means the result stands. If it had come to light during play, the punishment would have been a two hole penalty.

As Senior and Andy Sullivan beat Russell Henley and Kelly Kraft 2&1 it could be presumed the United States would have secured a half. This may prove costly for the Americans, yet to their credit they made no adverse comments over the ruling.

“There was no argument from anyone whatsoever,” reported a highly relieved Dawson from the R&A. He vowed to repeal the rule which he called “a bit daft”.

With 14 points to play for on the second day, four foursomes again, but ten singles rather than eight, momentum at this Walker Cup can and probably will swing like the Scottish weather during the final round.

The day started with the rules rumpus that was diplomatically settled, but at the conclusion of an eventful opening session GB&I are in the driving seat and it sets the stage for their quest to end a run of three successive defeats in the biennial contest continues.