Hometown hero Josh Geary’s strong run of form has continued at the SEC NZ PGA Championship where he leads after the first round.

Australian rookie Jack Weston is also off to a flying start in his first tournament as a professional sitting alone in second place, two shots off the lead. 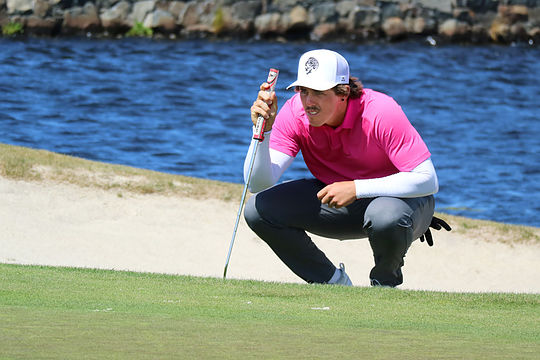 Turning pro at the start of 2019, Weston joined the field at the ISPS HANDA PGA Tour of Australasia event through Monday’s pre-qualifying.

“I turned pro about six weeks ago,” said Weston.

“I tried to pre-qualify for the Queensland PGA Championship a couple of weeks ago and didn’t make it but I pre-qualified again on Monday and made it through.”

“My biggest goal was just to get into a tournament and I knew once I was there I could showcase my golf out and that’s what I did today.”

“I’m happy with 65 and to be here in my first event I have no words. It’s all a massive learning curve for me so I’m just taking it one step at a time.”

A total of four players finished the day in a tie for third place at 6-under the card, with Blake Proverbs and Daniel Fox playing in the morning round followed by Nick Flanagan and Sam An this afternoon.

“It got quite windy out there but I just tried to play as solid as I could, play some good shots, hole some nice putts and obviously 66 is quite pleasing,” said An.

Flanagan echoed An’s thoughts that ‘boring’ but solid golf was what it took in the windy conditions to make a good score.

“It was pretty tricky early but I played pretty solid all of the way through that and once it died down on the last four or five holes, I had a good run at it coming in and got it done in the end,” Flanagan added.

Highlighting the morning round was a hole-in-one from Marco Zirov on the 169 metre 11th hole where he hit the ace shot with a 4-iron, a first on tour for the New South Welshman.