New Zealander Josh Geary leads the Fiji International after a windswept first round.

Playing in one of the last groups of the day, Geary stormed home with two birdies in his last four holes to shoot an even par 72. 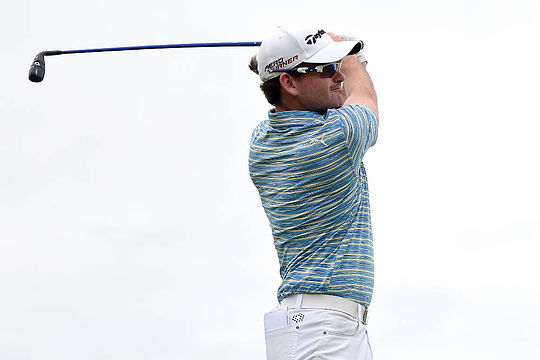 Josh Geary tees off in windy conditions on day one of the 2015 Fiji International (Credit: PGA Australia)

Geary was the only player in the first round to shot even par with his nearest competitors two shots further back.

“All in all it was a hard day and I’m pretty happy with 72,” said Geary who has notched up three victories on the PGA TOUR China this year.

“It’s always good when you’re winning and I think today a lot of that was freed up and just be able to play the game without having to get to tied up with how hard it was.”

Also playing in the afternoon field was tournament drawcard Matt Kuchar, who was pleased to be finished at 2-over the card.

“It felt like survival for sure, I don’t think I sniffed breaking 80 yesterday; I knew this course was really hard with this much wind,” said Kuchar.

Kuchar’s round was highlighted by an unusual situation on the par-4 2nd, where the wind literally blew his ball into the hole.

“I gave it a second, because I knew my putt earlier had rolled backwards, and sure enough the wind finally took it and blew it right back into the hole,” said Kuchar.

“I’m not sure I have ever witnessed that, I always thought that it could happen, so it was kind of fun that it happened to me today.”

Rounding out the top-10 on 3-over the card are Peter Cooke, James Nitties, Scott Laycock and Mathew Goggin.

Meanwhile Antonio Murdaca in his Pro debut finished the first round on 4-over the card after briefly co-leading with Kuchar.

The first round was suspended due to darkness with two groups finishing their rounds this morning at 6.30am.